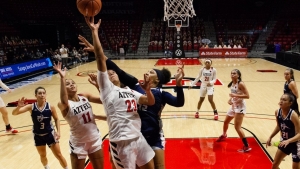 The Aztecs’ 77 points was a season-high and they had four players score in double-figures. Sophia Ramos finished with 21 points, her third time topping 20 points in the last four games. Freshman Kim Villalobos continued to impress and scored a career-high 16 points on 6-for-9 shooting and hauled in seven rebounds. Mercedes Staples notched her first career double-double with 11 points and 10 rebounds and Téa Adams finished with 11 points.

The Aztecs began the game down 9-2 and trailed for the majority of the first half, taking their first lead with 5:04 left in the second quarter. The Rams then went on a 9-0 run and held a 38-35 advantage at the half.

SDSU caught fire in the third quarter, outscoring the Rams 21-13 while shooting 56 percent from the field to build a 56-48 lead.

The Rams began the fourth quarter on an 11-2 run and ended up scoring 35 points in the quarter on 11-for-15 shooting to pull away.

The Aztecs outrebounded CSU 41-32 and slightly edged them in field goal percentage but the Rams made 12 three-pointers on just 26 attempts.

The Rams were led by Lore Devos’ 25 points and 11 rebounds. McKenna Hofschild finished with 19 points, seven assists and no turnovers.

The Rams outscored the Aztecs 35-21 in the fourth quarter.

Sophia Ramos topped 20 points for the third time in the last four games and now has 989 career points.

The Aztecs play at Colorado State again on Thursday at noon.