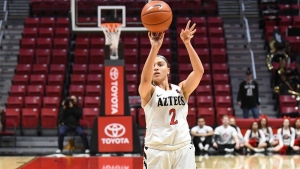 The Aztecs fell behind 12-8 in the first quarter, but then reeled off an 18-6 run to push their lead to eight points. SDSU shot 75 percent in the first quarter (9-for-12), but the Wolf Pack hung around due to their offensive rebounding. 11 of Nevada’s first 23 points came off second chance points.

After a blazing start, the Aztecs went ice cold in the second quarter. The scored just five points, a season low, and made just one of their final 15 shots in the first half. Meanwhile, Nevada made five of their final six shots and finished the half on a 17-2 run to take a 35-28 lead at the half. Only four Aztecs scored in the first half and Mallory Adams and Najé Murray accounted for 18 of their 28 points.

The Aztecs had their best defensive quarter in the third, holding the Wolf Pack to 33 percent shooting. Sophia Ramos was held scoreless in the first half but scored nine points in the third quarter and SDSU went 8-for-9 from the free throw line to close the gap to three points entering the fourth quarter.

SDSU shot 67 percent in the final frame and pulled within three points multiple times but the Wolf Pack had an answer every time and made nine free throws down the stretch.

Nevada was led by Jade Redmon’s 21 points; she was 9-for-10 from the free throw line. Essence Booker had 11 points. Terae Briggs had a double-double with 10 points and 10 rebounds.

The Wolf Pack outrebounded the Aztecs 42-32, including 16-4 on the offensive glass.

The Aztecs were outscored in second chance points 17-2 and 13-0 in the first half.

This was the second time this season Sophia Ramos has scored 17 points or more in the second half (CSUN, 12-9-19).

The Aztecs will be back in San Diego for their next two games beginning with a Saturday clash with UNLV at 1:00 p.m. It will be the Aztecs annual Play4Kay Pink Game.