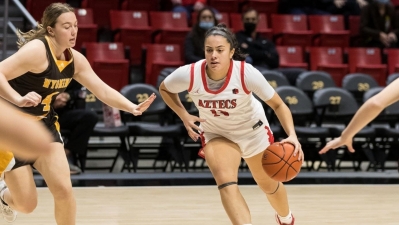 Mallory Adams (14) was one of three Aztecs in double-digits

SDSU committed a season-low six turnovers but struggled from the field until making a late fourth quarter run.

Three Aztecs finished in double-digits with Mallory Adams leading the way with 14 points. Asia Avinger had 12 and a team-high seven rebounds while Sophia Ramos had 11 for her 11th game (of 12) in double figures.

The Aztecs fell behind early after Wyoming went on a 7-0 run to take an 11-4 lead. A Mallory Adams buzzer beater at the end of the first quarter brought SDSU within three points (13-10).

Both teams struggled to score in the first half of the second quarter, but then the Cowgirls got hot and reeled off a 19-2 run and took a 32-16 lead into the halftime break.

The Aztecs were 9-for-13 in the fourth quarter and went on a 10-0 run late in the game, bringing their deficit back to single-digits with 31 seconds left.

SDSU missed their first eight three-pointers and finished 5-for-17.

Wyoming outrebounded the Aztecs 42-28 and had a 27-13 advantage in the first half. The Cowgirls had two players with double-doubles: Alba Sanchez-Ramos (15 points & 13 rebounds) and Allyson Fertig (12 points and 12 rebounds). Quinn Weidemann had 15 points as well.

The Aztecs were outrebounded 42-28.

The Aztecs will play at Fresno State Friday at 2 p.m. for the first Mountain West road game.