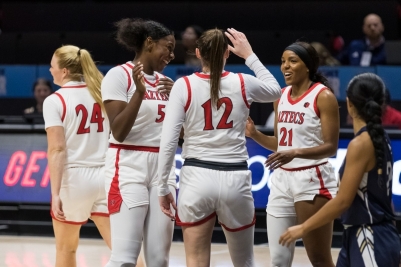 SDSU held the Lions to 29 percent shooting from the floor and 17 percent from three and forced 18 turnovers. Offensively, the Aztecs shot 50 percent from the field and had 21 assists on their 25 made field goals.

Four Aztecs finished in double-digits, led by Sophia Ramos 16 points, who also had a season-high seven assists. Abby Prohaska had 15 on 7-for-10 shooting, Yummy Morris chipped in 12 and Kim Villalobos had a double-double with 10 points and 11 rebounds.

The Lions began the game hot, making their first shots, but the Aztecs hung with them by forcing turnovers and then went on a 7-0 to go up 13-10, and never relinquished the lead.

SDSU shot 62 percent in the second quarter and led 34-23 at the halftime break with 22 of their 34 coming inside the paint.

The Aztecs began the second half on a 10-2 run to push their lead to 19 and were on cruise control for the remainder of the game.

The Aztecs held the Lions to nine points in each of the final three quarters while holding them to 22 percent shooting over that span.