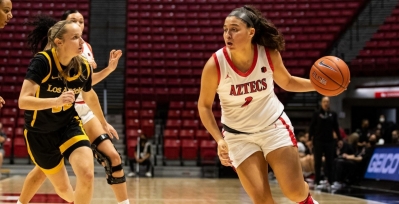 The Aztecs hit 13 three-pointers, their most in nearly four years

November 9, 2021 (San Diego) - The Aztecs women’s basketball team knocked off Cal State Los Angeles 72-57 Tuesday afternoon in their season opener inside Viejas Arena. SDSU hit 13 three-pointers, their most in a game since Dec. 10, 2017, and were paced by Sophia Ramos’ 21 points.

“I was really impressed with us getting 22 assists on 27 baskets,” Head coach Stacie Terry-Huston said after the game. “The way we shared the ball is really what got me excited. I really don’t care who scores, but we’re going to take quality shots and share the ball and keep our turnovers low.”

15 of Ramos’ points came from three-pointers. She also tied for a team-high with five rebounds. Mallory Adams had 15 points and Mercedes Staples had nine with five assists.

The Aztecs were hot all day and knocked down five threes in the first quarter and had assists on their first 11 field goals.

SDSU scored 20 or more points in each of the first three quarters and held a double-digit lead for the entire second half. A 9-0 run to close out the third quarter put them up 22 points, their largest of the game.

The Golden Eagles’ Lily Buggs finished with 11 points and 12 rebounds.

The Aztecs had 22 assists on their 27 made field goals.

Sophia Ramos hit five three-pointers to give her 101 for her career, moving her up to eighth place all-time in program history.

“Cal State LA did a great job of testing us in a lot of areas and exploiting some of our weaknesses. They were really physical which gave us some problems around the rim. This gave us some great film that we can show our young ladies on where we need to be better.” --Coach Stacie Terry-Hutson

The Aztecs play at UC Irvine Sunday at 2 p.m.