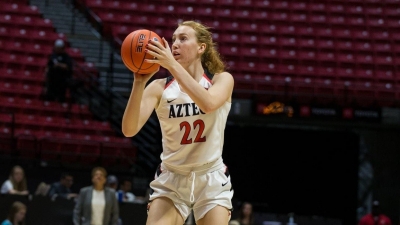 The Aztecs led for the entire game and were led by Taylor Kalmer’s 19 points. Zayn Dornstauder tied her career-high with 14 points on an efficient 6-for-7 shooting.

The Aztecs started slow offensively but they were able to hold the Cardinals to one field goal in the game’s first eight minutes and began the game up 11-2.

SDSU would limit the Cardinals to 18 points in the first half, the lowest for an opponent this season. Zayn Dornstauder and Taylor Kalmer paced the Aztecs with eight points each in the first half, helping SDSU to a 25-18 advantage at the halftime break.

The Cardinals made a couple runs in the second half and got as close as three points (30-27) midway through the third quarter. UIW pulled it to seven points with 3:30 left as well, but Sophia Ramos made two free throws to push the lead back to nine.

The Aztecs were outrebounded 34-32, making this the first time they have won when being outrebounded. Monique Terry led SDSU with a career-high seven rebounds and Zayn Dornstauder added four.

SDSU held UIW to 32 percent shooting from the floor and outscored the Cardinal bench 18-3.

The Cardinals were led by Imani Robinson, who had 21 points. Kara Speer had six points and a game-high 11 rebounds.

Taylor Kalmer and Zayn Dornstauder combined for 33 points on 14-for-19 shooting.

Sophia Ramos and Monique Terry, both San Antonio natives, had approximately 100 friends and family in attendance.

The Aztecs will be off for a week for the holidays and will resume play next Saturday when they host CSUN at 12:30 p.m. The men’s team will play Cal Poly later that day at 4:00 p.m. and a ticket to the women’s game gets you in to the men’s game.