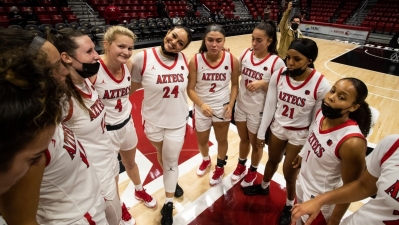 The Aztecs jumped out to an 11-2 lead but then saw the Anteaters come back with a 21-10 run to take their first lead of the game 23-21 in the final minute of the first quarter.

SDSU was able to hold Irvine to eight points in the second quarter and then led for the remainder of the game.

The Aztecs held the Anteaters to 28 percent shooting from the field and 15 percent (4-26) from three.

The Aztecs play at Cal State Fullerton Tuesday at 5 p.m. The game will be streamed on ESPN+ (subscription required).