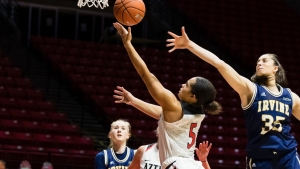 The Aztecs began the game on a 6-0 run and only allowed Nevada to make one field goal in the first quarter (and just three in the second).

SDSU held a nine-point lead at the half and the Wolf Pack kept it close for the majority of the third quarter, but the Aztecs began the final quarter on an 8-0 run to go up by 18 points (48-30) and never looked back.

Nevada was led by Da’Ja Hamilton’s 13 points. Megan Ormiston had seven points and a game-high 11 rebounds.

The Aztecs had a season-low eight turnovers while forcing Nevada to commit 16.

Mallory Adams made her first appearance of the 2020-21 season, her first game since November 26, 2019. She finished with four points and four rebounds in 17 minutes.

The Aztecs wrap up their two-game series at Nevada Saturday at 1 p.m. The game will be streamed on the Mountain West Network.