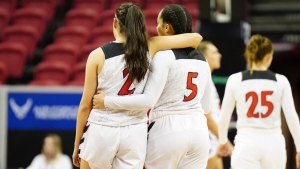 November 25, 2020 (Las Vegas) - The Aztec women’s basketball team fell to Washington 61-59 in their season opener Wednesday evening at T-Mobile Arena. The Huskies’ Tameiya Sadler hit a tough shot in the paint with five seconds left to break a 59-59 tie and then Sophia Ramos missed a contested three through contact at the buzzer.

Three Aztecs had three players in double-figures led by Sophia Ramos’ 17. Alex Crain, a transfer from TCU playing in her first game as an Aztec, had a career-high 12 points and Isabela Hernandez added 10 points. Mercedes Staples chipped in eight points and a team-high eight rebounds.

Following a theme from last season, the Aztecs were efficient from three (6-13) while holding UW to 3-for-23 shooting from deep.

The Aztecs were outrebounded 18-2 on the offensive glass leading to a 16-2 UW advantage in second chance points.

Alex Crain scored a career-high 12 points. Her previous high was 11 while at TCU.

The Aztecs will stay in Las Vegas and take on Lamar Friday at 3:45 p.m. at the South Point Resort and Casino.