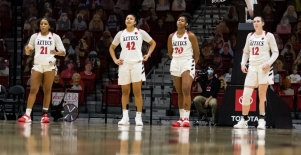 SDSU found themselves in a big hole at the half, but outscored the Rebels over the final 20 minutes, pouring in 42 second half points.

Four Aztecs scored in double digits led by Mercedes Staples’ 14. Sophia Ramos, who was playing in her first game since suffering a hand injury on December 10, finished with 12 points and five rebounds. Téa Adams finished with 11 and Kim Villalobos had 10 points in just 14 minutes of action.

After a close and low scoring first quarter, the Aztecs got the first bucket of the second quarter. The Rebels would score the next 13 points to open up a 27-11 advantage. Their lead eventually grew to as much as 24 points before holding a 43-23 lead at the break.

The Rebels made nine three-pointers with seven of them coming in the first half.

This was Sophia Ramos’ first game since suffering a hand injury on December 10.

This was the third time this season where four Aztecs scored in double digits.

The Aztecs take on the Rebels tomorrow (Tuesday) at 3 p.m.