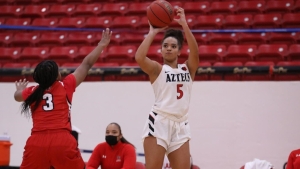 Tea Adams had a career-high 24 points

The Aztecs, who played the majority of the game without leading scorer Sophia Ramos, saw three players record career-highs for points. Téa Adams played phenomenal and finished with 24 points, Mercedes Staples notched her second straight double-double with 16 points and 13 rebounds and freshman Kamaria Gipson came off the bench to collect a career-high 10 points and 10 rebounds.

Adams had a block in the final seconds of regulation to force overtime and then hit a three in the closing moments to force the second overtime.

The Aztecs then held CSU scoreless for an eight-minute stretch in the second quarter as they went on an 11-0 run to retake the lead.

SDSU led by as much as five points in the third quarter but then missed their first six field goals in the fourth quarter and CSU retook the lead.

Adams showed her senior leadership, scoring six straight points down the stretch in the fourth quarter to give SDSU a 60-58 lead with two minutes left. The Rams would tie it with 1:35 left and then neither team would score the rest of the way. Adams had a huge block on McKenna Hofschild with three seconds left to force overtime.

The Rams were led by Lore Devos’ 23 points and 12 rebounds. McKenna Hofschild added 18 points while Tori Williams notched a double-double with 10 points and 10 rebounds.

The Aztecs outrebounded the Rams 60-42 and 23-6 on the offensive glass.

Mercedes Staples (16 points & 13 rebounds) and Kamaria Gipson (10 points & 10 rebounds) both finished with a double-double, the first time two Aztecs have had a double-double in the same game since last December 7 when Sophia Ramos and Baylee Vanderdoes accomplished it at San Jose State.

The Aztecs’ game against St. Katherine that was scheduled for Sunday, Dec. 13 was canceled. SDSU will be off until December 19 when they host UC Irvine at 4 p.m.