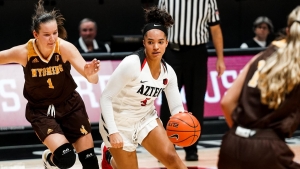 October 9, 2020 (San Diego) - San Diego State, in conjunction with the Mountain West, has announced the women's basketball conference schedule for the 2020-21 season.

The conference format will remain the same with each team playing eight of the other 10 teams twice and playing two opponents once. This season, the Aztecs will not play Boise State at home and will not travel to play at Utah State. This is the eighth season the conference has been organized in this layout.

Subject to state, county and local officials, the 18-game schedule will begin on Thursday, December 31 and conclude Tuesday, March 2. The Mountain West Basketball Championship will be held March 7-10 at the Thomas & Mack Center in Las Vegas.

The Aztecs begin their Mountain West schedule with four of their first five games at home. SDSU kicks off the conference slate New Year’s Eve when they host Air Force and then welcome in New Mexico on January 2nd.

After a January 6th game at San Jose State, the Aztecs return to Viejas Arena to take on UNLV (Jan. 9) and Nevada (Jan. 13).

SDSU then takes on New Mexico (Jan. 16) and Air Force (Jan. 18) on the road and then will play three of their next four at home starting with Wyoming (Jan. 21) and Colorado State (Jan. 23). After closing out January with a game at UNLV (Jan. 30), they host Fresno State on February 3.

The Aztecs finish the regular season with five of their last seven games on the road. They will have three straight road contests beginning at Nevada (Feb. 6), followed by Colorado State (Feb. 11) and Wyoming (Feb. 13).

SDSU then hosts Utah State (Feb. 17) before heading to Boise for their lone matchup with the defending champion Broncos (Feb. 24).

The Aztecs will host San Jose State for Senior Night (Feb. 27) and then wrap up the regular season at Fresno State on March 2nd.

The Aztecs went 9-9 in conference play last season and tied for fifth place, their highest finish since 2012-13.

The Aztecs have eight newcomers (five freshmen and three transfers) who will be joining the program for the 2020-21 season, including Minnesota transfer Mercedes Staples and top-100 recruit Asia Avinger (Cerritos, Calif.).

The non-conference schedule will be released at a later date.