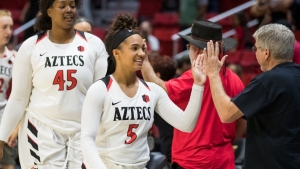 In the modified format, Mountain West teams will face each other in a two-game series in the same week with a one-day break between contests. Each institution will have five home and five road series, reducing the regular travel schedule by four weeks to help mitigate potential virus exposures.

The Aztecs begin conference play at Colorado State December 8 and 10th. Their first home conference series will be after Christmas when they host UNLV December 31st and January 2nd.

San Diego State will then head to Wyoming for a series against the Cowgirls January 28th and 30th and then alternate home and road series for the remainder of the regular season.

The Mountain West Championships will take place in Las Vegas at the Thomas and Mack Center March 7-10.

The new schedule format creates flexibility throughout the season to potentially reschedule games which may need to be postponed as the schedule plays out. This is a one-year model adopted specifically to address the unique challenges of the current COVID-19 pandemic.

San Diego State’s non-conference schedule and tip times will be announced at a later date.