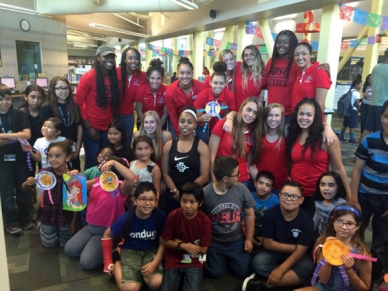 
The inaugural year of the event, women’s basketball programs across the country participated in the association’s Day of Service.

“Having the opportunity to give back to our community is so rewarding,” junior Khalia Lark said. “As student-athletes at SDSU, it’s refreshing to know that we are role models in the greater San Diego community. The illuminating smiles and playful laughter of the kids left each of us with full hearts and will stay with us as we progress throughout the year.” 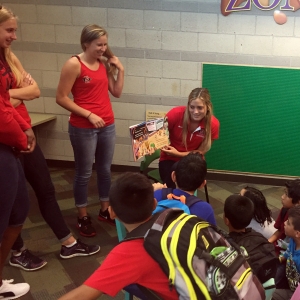 The reading event was just one example of how San Diego State women’s basketball stays active in the San Diego community throughout year.

Earlier this semester, residents of Vi at La Jolla Village, a retirement community in La Jolla, visited the team and received a tour of the Jeff Jacobs JAM Center, watched the Aztecs scrimmage and had an opportunity to participate in basketball drills.

“Participating in events like this are incredibly beneficial for our program,” San Diego State women’s basketball director of operations Jon Silver said. “We are so lucky to be a part of such a wonderful community here in San Diego. To be able to give back to the community that has lent us so much is a privilege, and I know our student-athletes feel the same way.” 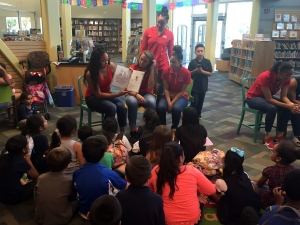 The Aztecs will continue their community service throughout the school year. On Oct. 15, the team welcomes the Senior Women’s Basketball Association (SWBA) to campus for a basketball clinic. SWBA is a nonprofit organization based in San Diego with players of at least 50 years of age who play three-on-three, half-court, recreational and competitive basketball weekly at the Mission Valley YMCA.