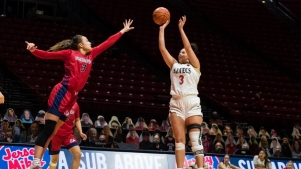 Aztecs finish the game on a 7-0 run

The Broncos got off a contested three with four seconds left that rimmed out to give SDSU their first win in Boise since 2013.

Mallory Adams finished with a season-high 18 points with a career-high four three-pointers. Her and Sophia Ramos scored 15 of the Aztecs’ 19 fourth quarter points. Ramos finished with 15 points, five rebounds and five assists. Freshman Flo Vinerte gave SDSU some big minutes off the bench and chipped in eight points and eight rebounds in 16 minutes.

The Aztecs found themselves down by 10 points at the end of the first quarter trailing 25-15 after the Broncos’ Jade Loville and Mallory McGwire combined for 17 points.

The second half was a game of runs. The Broncos began the third quarter on an 11-2 run to push their lead back to double-digits only to see SDSU respond with a 6-0 run. The Aztecs kept it close through the fourth quarter but never could tie it up.

After Jade Loville hit a tough jumper with 1:28 left, the Broncos held a 72-67 lead. Down the stretch, Sophia Ramos drew two fouls on Mallory McGwire to foul her out and knocked down all four free throws.

After getting a stop with 30 seconds left, the Aztecs had the ball down one and elected not to call a timeout. Sophia Ramos missed a floater, but got her own offensive rebound and kicked it out to Téa Adams, who swung it to Mallory Adams who canned the game-winning three with 11 seconds left.

The Broncos were led by McGwire’s 21 points, 15 of which came on threes. Loville had 17 and Abby Muse had 16 points.

The Aztecs only led for 40 seconds of the game, 11 of which were at the end of the game.

The Aztecs square off against the Broncos again on Sunday at noon.