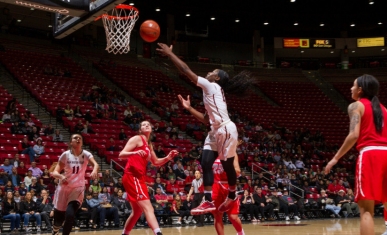 SDSU debuts its 2017-18 squad with an exhibition contest on Nov. 3 against Cal State Los Angeles. The team kicks off its regular season with its first three-game homestand of the year on Nov. 10, a home game against Presbyterian. This will be the first meeting between the Aztecs and any opponent from the Big South conference since SDSU beat Longwood at home, 79-37, on Jan. 4, 2012.

The Aztecs then host a pair of Big West schools, Cal State Northridge and Cal State Fullerton. The Matadors come to town on Nov. 14 ahead of the Titans’ visit to Viejas Arena on Nov. 18. San Diego State sports a 100-89 mark all-time against Big West opponents.

San Diego State next enjoys a tropical Thanksgiving holiday at the 2017 Junkanoo Jam in the Bahamas. Held at Gateway Christian Academy in Bimini, Bahamas from Nov. 23-25, SDSU opens the three-day tournament against Central Michigan on Fri., Nov. 24 at 5:15 p.m. (ET). The Chippewas are coming off a 2016-17 campaign that saw them post the second-most wins in program history (23).

SDSU will play either Tulane or Iowa State, both of whom advanced to the postseason (Iowa State – NCAA; Tulane – WNIT) on Sat., Nov. 25 at either 4:15 p.m. (ET) or 6:45 p.m. (ET). Also participating in the tournament, presented by the Hilton at Resorts World Bimini, are Baylor, Georgia Tech, Iowa State, Missouri State, Penn and Tulane.

Upon their return to Montezuma Mesa, San Diego State tangles with its crosstown rival San Diego on Weds., Nov. 29. The Aztecs will look to reverse a three-game slide against the Toreros, against whom SDSU holds a 28-12 series advantage.

SDSU next enjoys its final three-game homestand of the year, engaging in a trio of contests in six days. UC Irvine visits America’s Finest City on Fri., Dec. 8, when the Aztecs will look to lengthen a two-game series win streak against the Anteaters. NAIA competitor Hope International comes to town two days later on Sun., Dec. 10 for their first game against the Aztecs. Santa Clara closes out the homestand on Thurs., Dec. 14. The Aztecs and Broncos have only faced each other twice, with the most recent meeting occurring during the 2003-04 season.

Following an eight-day break for finals, the Aztecs travel to California’s Central Coast to close out the non-conference slate on Fri., Dec. 22 at UC Santa Barbara. The Gauchors are a season removed from advancing to the Big West Tournament title game.

The Aztecs’ Mountain West lid lifter is set for Dec. 28 against Wyoming.

For the 2017-18 campaign, San Diego State returns 78.9 percent of its scoring, nine letterwinners and four starters, including All-Mountain West First-Team pick McKynzie Fort. The Aztecs will also welcome the 23rd-ranked recruiting class in the country, according to Prospects Nation, to Montezuza Mesa for head coach Stacie Terry’s fifth year.