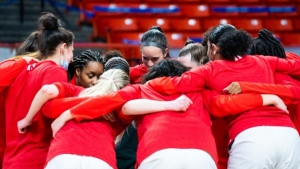 SDSU will play 11 games (six home, five away) and their schedule is highlighted by two meetings with schools who made the postseason in 2021 and two power five opponents (Ole Miss and Ohio State).

Following a home exhibition game against Biola on October 28, SDSU will kick off the season November 9 when they host Cal State Los Angeles.

The Aztecs then hit the road for a pair of games against Big West teams in Southern California. First against UC Irvine (Nov. 14), who made the Big West Championship game in 2021, and then at Cal State Fullerton on Nov. 16.

The Aztecs will then head to the Bay Area where they will play Ole Miss (Nov. 26) and Furman (Nov. 27) at Cal. The Rebels played in the WNIT Championship game a season ago.

SDSU’s annual game against San Diego will be Dec. 1 inside Viejas Arena. The Aztecs knocked off the Toreros 64-56 on the road last year.

The Aztecs play at California Baptist Dec. 8. The Lancers went 26-1 last year and advanced to the third round of the WNIT.

SDSU will wrap up their non-conference schedule with home games against UC San Diego (Dec. 17) and Ohio State (Dec. 21).

This will be the Aztecs’ first ever meetings with Georgia Southern, UAB, Ole Miss and Ohio State.

SDSU lost just one starter (Téa Adams) from last season and returns 10 of their top 11 scorers, including Sophia Ramos (15.7 ppg) and Mercedes Staples (11.5). Also returning are Kim Villalobos, who was named to the 2020-21 Mountain West All-Freshman Team, and Asia Avinger, who missed all of last year after being named the 2020-21 Mountain West Preseason Freshman of the Year.

Game times to be announced at a later date