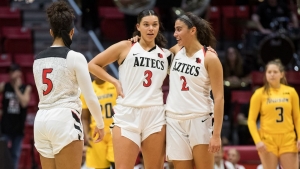 In total, the Aztecs will play seven non-conferences games. Four will be in Viejas Arena, two will be at a neutral site (Las Vegas) and their one road game will be at San Diego (Dec. 5).

The Aztecs will begin the season playing in the South Point Thanksgiving Classic in Las Vegas. Their first game will be Friday, November 27 against Lamar at the South Point Hotel. Two days later, the Aztecs take on Washington at T-Mobile Arena.

San Diego State hosts California Baptist for their first home game on December 2. This will be the third straight season playing the Lancers with the Aztecs winning each of the last two meetings.

The Aztecs won’t have to travel far for their lone non-conference road game, playing at San Diego December 5.

SDSU will then play two conference games at Colorado State (Dec. 8 & 10) before returning to Viejas to host Saint Katherine’s December 13.

The Aztecs wrap up their non-conference slate with home games against UC Irvine (Dec. 19) and Cal Poly (Dec. 21).

Fans will not be allowed to attend home games to begin the season.