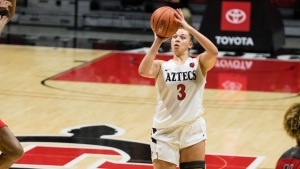 It was the second game in a row where the Aztecs held a lead at halftime over the Lobos only to see New Mexico get hot in the third quarter and pull away for the win.

Mallory Adams had her best game of the season, finishing with 16 points and going 7-for-8 from the line in a season-high 27 minutes. Isabela Hernandez had six points and hauled in a career-high nine rebounds. Additionally, Mercedes Staples had nine points and five rebounds while Kim Villalobos had eight points and three assists.

New Mexico scored the game’s first six points followed by 11 straight by the Aztecs. SDSU struggled with turnovers early on but shot at a high percentage and led by as much as 11 points.

SDSU cooled off in the second quarter but their defense continued to hold New Mexico at bay. The Aztecs held a four-point led at the half while forcing 11 Lobo turnovers and holding them to 24 percent shooting.

New Mexico shot 64 percent from the field in the second half, including 56 percent from three. A 14-2 run across the end of the third quarter and beginning of the fourth put the game out of reach.

New Mexico had four players score between 10-13 points and were led by Ahlise Hurst’s 13.

The Aztecs had 11 assists on their 16 field goals and forced 17 New Mexico turnovers.

New Mexico was 7-for-11 from the field in both the third and fourth quarter.

Mallory Adams had a season-high 16 points.

The Aztecs are off until February 15 when they host UNLV on back-to-back days.