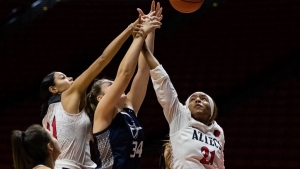 Adams scored the game’s first two points and then Utah State scored the next 12. The Aggies would hold a lead until midway through the fourth quarter.

SDSU began the second quarter on a 6-0 run to pull within a point only to see the Aggies respond with a 9-0 run to push their lead back to double-digits. This happened again in the third quarter when Utah State followed a SDSU 7-9 run with a 6-0 run.

However, in the fourth quarter the Aztecs finally grabbed the lead, fueled by some big minutes from Vinerte off the bench. After hitting a buzzer-beater at the end of the third quarter, she scored eight more points in the first five minutes of the fourth.

Utah State’s Shyla Latone finished with 30 points with six made three-pointers, accounting for all of the Aggies’ threes.

The Aztecs had a season-high 16 assists.

This was the Aztecs’ largest comeback win (10 points) of the season.

This was SDSU’s fourth straight game committing 10 or less turnovers.