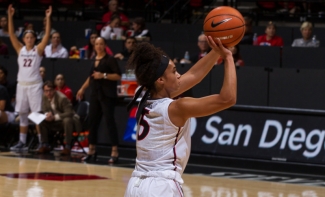 Preseason All-Mountain West honoree McKynzie Fort was the Aztecs’ leader on offense, recording 19 points with team highs in rebounds (6) and assists (5). In her collegiate debut, Te’a Adams scored 15 points, going 4-for-7 from the floor with a pair of long balls, and tacking on a trio each of rebounds and assists. Senior Geena Gomez also scored in the double digits with 11 points.

After a disappointing first quarter for SDSU in which the Aztecs trailed, 13-11, Adams’ strong second quarter propelled San Diego State. Thirty seconds into the frame, she knocked down a three from the right side. Two-and-a-half minutes later, she served up a bounce pass under the basket to Cheyenne Greenhouse on the right side, who lifted in the ball to tie the game at 17-17. On SDSU’s next possession, Adams hit her second long ball of the game, again from the right side of the basket. She followed that up with a layup for the 24-19 score at 5:55, getting nine points in 3:35.

Midway through the third quarter, the Aztecs built on their 40-34 lead with a nine-point run. Following a Gomez jumper from the free-throw line at 5:10, Adams broke away from the pack with Baylee Vanderdoes racing alongside her. She slipped the ball to Vanderdoes who made the layup, putting SDSU up by double digits at 3:47 in the third. The ensuing Aztec possession saw Gomez nail a three from the right side of the basket, which Adams built upon with a layup 24 seconds later. SDSU’s 21 points in the third frame were a game high, helping the Scarlet and Black to a 51-40 lead after 30 minutes of play.

A strong fourth quarter wrapped up the game for the Aztecs, who doubled up on the Golden Eagles, 20-10, in the period.

The Aztecs open the season on Friday, Nov. 10 at noon in Viejas Arena against Presbyterian.