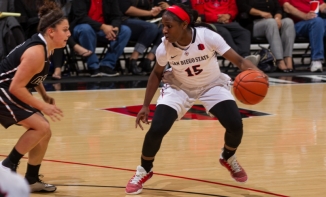 November 4, 2016 (San Diego) - Shooting 50 percent (11-for-22) from beyond the arc, San Diego State women's basketball topped Cal State San Marcos, 74-53, in its lone exhibition of the season on Friday night at Viejas Arena.

Despite Fort making the first basket of the game, Cal State San Marcos went on an 18-9 run and took an 18-15 lead into the second quarter.

By the start of the second quarter, however, the Aztecs were firing on all cylinders. SDSU went on a 12-0 run to start the frame and didn’t allow a Cougar basket until just 5:23 remained in the period.  At halftime, San Diego State led 34-24, due in large part to Fort’s 20 points, 12 of which came in the second stanza.

The Aztecs kept up its pace in the third quarter. The period started with Bostick snatching the ball away from a Cougar and handing it off to Greenhouse, who sent it along to Ellison for the three. Ellison followed that up with a second three 92 seconds later for the 40-26 lead.

Freshman Naomi Ekwedike would go on to knock in a pair of layups, while Fort and Geena Gomez would fire off a pair of long balls. After 30 minutes of play, the Scarlet and Black held a 54-37 advantage.

San Diego State maintained its hot shooting in the final quarter, going 3-for-4 from behind the three-point line and recording an 8-for-12 field goal percentage for the final 74-53 score.