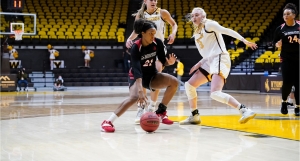 Mercedes Staples led the Aztecs with 11 points on 5-for-11 shooting. Mallory Adams added eight off the bench.

Wyoming hit three quick three-pointers to open up a 10-point lead at the end of the first quarter. The Cowgirls would end up making 10 three-pointers on 23 attempts.

The Aztecs cut their deficit to seven midway through the third quarter, but Wyoming responded with a run to push their lead up to 15.

The Aztecs committed just 10 turnovers after having 19 in the first game of the series.

Wyoming had balanced scoring with four players scoring between eight and 11 points.

Mallory Adams had her top two scoring games of the season at Wyoming. After scoring 12 on Thursday, she had eight Saturday.

The Aztecs will play their next six games at home beginning with a two-game series against New Mexico beginning Wednesday.