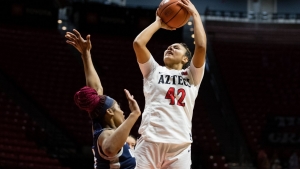 The Aztecs trailed by five after the first quarter but took the lead after holding the Falcons to just three field goals in the second quarter. The Falcons missed their final 13 shots of the half.

The second half was full of runs. A 9-0 Aztec run gave SDSU a 10-point lead midway through the third. Air Force responded with their own 14-3 run to tie the game at 39.

The Aztecs had 14 offensive rebounds and a season-high 24 points in the paint.

The Falcons finished the game on a 19-6 run.

The Aztecs head to Wyoming for a two-game series (Thursday and Saturday).