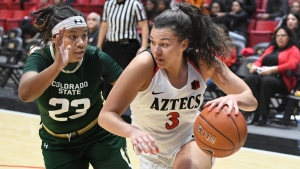 February 13, 2019 (San Diego) - Behind a standout defensive performance, the Aztec women’s basketball team (10-12, 5-6) knocked off Colorado State (8-15, 2-10) 54-45 Wednesday evening inside Viejas Arena. SDSU held the Rams to 28 percent shooting from the field and held them to seven points or less in the first and third quarter.

The Aztecs have now won four games in a row and have moved up to sixth place in the Mountain West standings after starting last week in a tie for tenth.

Freshman Mallory Adams notched her eighth double-double on the year and led the Aztecs with 17 points and 13 rebounds, which tied a career-high. Her freshman counterpart, Sophia Ramos, had 13 points, five rebounds and a team-high five assists.

The Aztecs held the Rams to 27 percent shooting (3-11) in the first quarter and only turned the ball over once, taking a 14-7 lead into the second quarter. The seven first quarter points were the fewest the Aztecs have allowed in the opening quarter on the season.

Both teams came out of the locker room cold as they combined to miss their first 11 shots. The Rams were able to build their lead to 30-23, but the Aztecs responded with a 10-0 run to close out the third quarter (33-30). Like the first quarter, SDSU committed just one turnover in the third quarter.

SDSU’s run poured over into the fourth quarter and they build a 41-32 lead on an 18-2 run. The Aztecs’ defense only tightened as the game progressed and at one point CSU was 2-for-20 in the second half. The Rams finished with the second half shooting at a 20 percent clip (6-29)

The Rams got as close as four points (47-43) with 1:14 remaining but Mallory Adams hit two free throws on the next possession to put the game out of reach.

The Rams were led by Lore Devos’ 15 points. Mollie Mouncey chipped in nine points but was held to 3-for-14 shooting. The second game in a row the Aztecs have held their opponent’s leading scorer in check.

The Aztecs held the Rams to seven first quarter points, the lowest they have held an opponent in the opening quarter this year. They also limited CSU to six points in the third quarter.

The Aztecs have held their last three opponents under 60 points and during their four game win streak opponents are shooting just 32 percent from the field.

This is the second game in a row the Aztecs have overcome a nine point deficit to win.