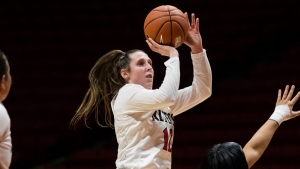 January 9, 2021 (Reno) - The Aztec women’s basketball team (3-7, 1-3) split their series at Nevada (5-4, 1-3) after falling to the Wolf Pack 66-59 Saturday afternoon. SDSU trailed by 17 points in the third quarter and rallied to take the lead midway through the final frame but then saw the Wolf Pack make a run to secure the win.

Téa Adams led the Aztecs in scoring with 12 points. Freshman Kim Villalobos had 11 and six rebounds and Mercedes Staples chipped in eight points and nine rebounds.

After SDSU held Nevada to one first quarter field goal on Thursday, the Wolf Pack managed seven in a fast-paced opening quarter on Saturday. SDSU shot 9-for-14 with Téa Adams going 4-for-4 and led 19-18 after ten minutes of play.

The Aztecs went cold from the field in the second quarter however, making just one of their first 12 shots while Nevada went on an 8-0 run and extended their lead to 10 points.

SDSU started the third quarter slow as well, missing five of their first six shots as the Wolf Pack pushed their lead to 17 points (49-32). The Aztecs then hit eight of their next nine shots and went on a 16-2 run, all without Téa Adams, who was on the bench with foul trouble.

SDSU’s run continued and they went up 55-53 lead after an Isabela Hernandez three with 4:59 left, but then saw the Wolf Pack go on a 7-0 run to retake the lead, which they never surrendered.

The Aztecs outshot Nevada, finishing with a 40.7 field goal percentage compared to the Wolf Pack’s 32.3 rate, but SDSU was just 2-for-12 from three and 9-for-17 from the line.

The Wolf Pack were paced by Da’Ja Hamilton’s 16 points. Amaya West had 14 points and eight rebounds.

San Diego State made 10 of their first 12 two-point field goals but missed their first seven three-pointers.

The Aztecs will be home for their next four games beginning with their Utah State series Thursday and Saturday.