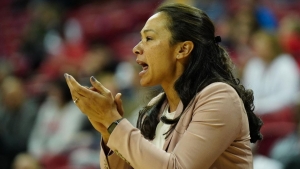 April 2, 2020 (San Diego) - San Diego State women's basketball head coach Stacie Terry-Hutson has signed a contract extension that will keep her on The Mesa through the 2023-24 season.

“I am very proud to represent this amazing institution and athletic department,” Terry-Hutson said. “I am grateful to have coached and continue to coach such amazing student-athletes. I am surrounded by tremendous coaches and support staff and I am thankful for their hard work and dedication to the program. I appreciate John David Wicker and Steve Schnall for their support and vision and am so grateful for their faith in me.”

The 2019-20 Aztecs finished 9-9 in conference and tied for fifth place in the Mountain West, their highest placing under Terry-Hutson, who recently wrapped up her seventh season. SDSU has improved their record in conference play in each of the last three seasons.

“I’m pleased to announce an extension for Coach Terry-Hutson,” Director of Intercollegiate Athletics John David Wicker explained. “This was a decision that was weighed carefully and with discussion from many different stakeholders. The growth in the overall program is readily apparent and I’m confident Coach Terry-Hutson will continue the on-court progress made over the last couple of seasons.”

This past season, SDSU lost star forward Mallory Adams to a season-ending injury after just six games but still saw Sophia Ramos and Taylor earn All-Mountain West recognition, the first time SDSU has had two All-MW honorees under Terry-Hutson. SDSU finished with 14 wins, tying a career-high for Terry-Hutson and won five road games, the most under Terry-Hutson.

Off the court, the Aztecs had their highest GPA of the last eight semesters in the fall of 2019 and have had at least 11 scholar-athletes each of the last four years. 2019-20 also was a banner year for support in the community as SDSU set program records for total, average and single-game attendance.

The 2020-21 Aztecs return all-conference honoree Sophia Ramos and eight others. SDSU will have five newcomers including Mercedes Staples, a transfer from Minnesota, and Asia Avinger, the highest-rated recruit to commit to SDSU under Terry-Hutson.