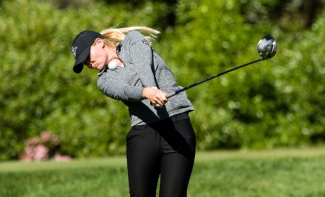 October 9, 2017 (Austin) - The San Diego State women’s golf team sits in 10th place at the Betsy Rawls Longhorn Invitational after shooting a collective 17-over-par 593 on Monday during the first two rounds at the University of Texas Golf Club.

The Aztecs trimmed 13 strokes off their combined score in the second round, carding a 290 after logging a 303 in the morning session. With its total, SDSU remains just three shots behind UNLV and Houston, which are tied for fifth at 14-over heading into Tuesday’s final round on the par-72, 6,491-yard track.

Tournament host Texas was the lone school to finish in red figures on Monday, posting an 8-under 568 on its home course to build a sizeable 13-stroke advantage over second-place Arizona State (+5), while Clemson (+8) occupies the third position, followed by Miami (+10).

Individually, SDSU was led by Sara Kjellker (Hollviken, Sweden), who finds herself in a four-way tie for 21st at 2-over 146 on rounds of 75-71. The Aztec freshman recorded a team-high seven birdies, including five in the second round to vault 21 places on the leaderboard. Among her afternoon conversions was an impressive drain on the par-4, 392-yard No. 3, which ranked as the third-toughest hole of the day. With her scores, Kjellker remains just three shots out the top 10, where five golfers are tied for sixth at 1-under.

Elsewhere, Georgia Lacey (Del Mar, Calif.) sits one stroke in back of Kjellker in a tie for 25th at 3-over 147 after carding a 73-74. The SDSU senior birdied three holes in each round, including a successful make on the par-4, 417-yard No. 18, which ranked as the fifth-most difficult green of the afternoon session. The Torrey Pines alumna soon followed with another drain at No. 1, followed by three straight pars. However, a bogey on her final hole at the par-5 fifth prevented a loftier perch.

After opening with an inauspicious 79, Mila Chaves (Asunción, Paraguay) whittled seven shots off her score in round two, carding a 72 to leap 14 places into a tie for 53rd at 7-over 151.  The Aztec senior found birdies elusive in the morning, but regrouped with four conversions in the second round, including back-to-back drains on her final two greens of the day at No. 4 and No. 5.

Gioia Carpinelli (Boppelsen, Switzerland) showed dramatic improvement as well, posting a 72 to ease the sting of an opening-round 79 that featured a plague of five bogeys and one double bogeys. Still, the Aztec freshman managed a team-high 26 pars overall to finish the day alone in 58th at 8-over 152. The Swiss native also sank a pair of birdies in the afternoon, including a successful drain at the par-5, 526-yard No. 9, which ranked as the fifth-toughest hole on Monday.

Rounding out the SDSU lineup was Haleigh Krause (Eugene, Ore.), who finds herself one shot in back of Carpinelli in a tie for 59th at 9-over 153 on rounds of 76-77. The Aztec senior got off to a fast start in round two with a birdie on her first hole, the par-4, 461-yard No. 5, but consecutive bogeys quickly sapped her momentum. Despite notching 12 pars, however, Krause was unable to make up ground thanks to an additional bogey at No. 11 and a triple at No. 1.

The Betsy Rawls Longhorn Invitational will conclude on Tuesday when the Aztecs tee off alongside Texas Tech and Oklahoma for the final round, beginning with a shotgun start at 8:30 a.m. CT/6:30 a.m. PT.