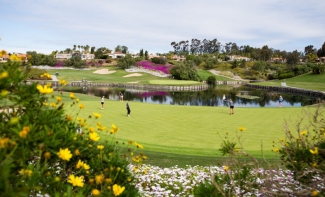 SDSU opens its fall slate in earnest next month when it makes its 14th straight appearance at the annual Branch Law Firm/Dick McGuire Invitational, Sept. 11-12, at UNM Championship Course in Albuquerque, New Mexico.

Two weeks later, the Aztecs will return to the Mountain time zone looking for their third consecutive team title at the Golfweek Conference Challenge, Sept. 25-27, in Wolcott, Colorado. SDSU came through in the clutch at last year’s event, posting a collective nine birdies and one eagle on the back nine of the final round to withstand a furious rally by host Denver.

The following week, SDSU will trek to the Midwest for Northwestern University’s Windy City Classic, Oct. 2-3, at Northmoor Country Club in Highland Park, Illinois. The Aztecs last competed at the suburban Chicago tournament in 2010, where they finished fifth out of 11 squads.

San Diego State will then close out its fall schedule at the Betsy Rawls Longhorn Invitational, Oct. 9-10, in Austin, Texas. The Aztecs made consecutive appearances at the University of Texas Golf Club in 2013 and 2014, and will return to play the course as a potential preview for next spring’s NCAA regional championships.

After a four-month hiatus, SDSU commences its 2018 spring slate at the Northrop Grumman Regional Challenge, Feb. 11-13, in Palos Verdes Estates, California.  The Aztecs made their first-ever appearance in the Ohio State event last year, tying for eighth in a daunting field that featured 11 schools ranked among the Golfstat top 30 at the time.

San Diego State will remain in the Golden State for its next outing when it competes in the ninth annual Bruin Wave Invitational, Feb. 26-27, in San Luis Obispo, California. The Aztecs have played in all eight previous installments of the joint UCLA and Pepperdine tournament, which will be conducted along the Central Coast at San Luis Obispo Country Club for the third straight season.

Nearly three weeks later, SDSU will venture into uncharted territory when it travels to Puerto Vallarta, Mexico, for the second annual Hawkeye-El Tigre Invitational, March 16-17, hosted by the University of Iowa. The Scarlet and Black did not participate in the inaugural event last year when Washington edged UTSA by one stroke for the team title.

A quick turnaround awaits the Aztecs stateside when they play host to the aptly named SDSU March Mayhem, scheduled for March 26-28 at The Farms Golf Club in nearby Rancho Santa Fe. Launched in 2013, the Aztecs’ lone home tournament of the campaign will feature a match-play format for the fourth straight year. Last season, Georgia Lacey led the San Diego State with a 3-1 individual record, as the Scarlet and Black finished eighth in a stacked 16-team field.

Spalding’s charges will return to the Lone Star State for their final tune-up before the conference tournament at the Bruzzy Challenge, April 2-3, in Carrollton, Texas.  The inaugural event, hosted by the University of North Texas, will be held at Maridoe Golf Club in suburban Dallas.

For the sixth straight season, the Mountain West Championship will be conducted at Mission Hills Country Club, April 16-18, in Rancho Mirage, California. Last spring, Fernanda Escauriza became the Aztecs’ first-ever individual medalist in a conference meet, posting a two-shot victory to earn MW Freshman of the Year honors.  As a team, San Diego State came up three strokes shy of a title, finishing in the runner-up spot after tying for third in 2016.

The Aztecs will be seeking their eighth postseason berth as a team in the last nine years when the NCAA holds its regional championships, May 7-9, across four sites, including Stanford, California; Austin, Texas; Madison, Wisconsin; and Tallahassee, Florida.

If SDSU qualifies for the NCAA finals, it will compete in the national championship series for the first time in program history, May 18-23, at Karsten Creek Golf Club in Stillwater, Oklahoma.

San Diego State, which finished the 2016-17 campaign with a No. 34 national ranking by Golfstat, returns four letterwinners from a year ago, including Escauriza and Lacey, who both garnered all-MW accolades.