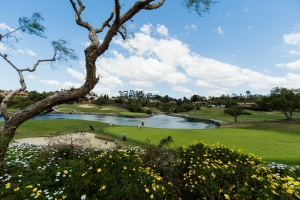 August 15, 2018 (San Diego) - San Diego State women’s golf head coach Leslie Spalding revealed the team’s highly anticipated 2018-19 schedule on Wednesday. The Aztecs are slated to compete in 10 tournaments during the upcoming season, leading up to regionals and the NCAA Championships next spring.

For the fourth year in a row, SDSU will open its fall semester in Albuquerque, New Mexico, when it participates in the 40th annual Branch Law Firm/Dick McGuire Invitational, Sept. 10-11, at UNM Championship Course. The Scarlet and Black posted a solid fifth-place finish among 18 schools at the event last year, tying its highest placement in 14 previous appearances (2011, 2014, 2017).

Two weeks later, the Aztecs will find themselves on familiar turf once again, returning to the Mountain time zone for th Golfweek Conference Challenge, Sept. 24-26, in Wolcott, Colorado. SDSU will be looking to capture its third tournament title in four years at the scenic Red Sky Golf Club after tying for the fifth spot last season.

As the calendar flips pages, SDSU will add to its frequent flyer mileage with another repeat engagement at Northwestern University’s Windy City Classic, Oct. 1-2, in Wilmette, Illinois. The tournament venue shifts to Westmoreland Country this year after the Aztecs tied for 12th at Northmoor Country Club in Highland Park last season.

San Diego State will head north to the Bay Area for its next outing when it partakes in the Stanford Intercollegiate hosted by Dr. Condoleezza Rice. The Aztecs skipped the event in 2017, when it was moved to Poppy Hills Golf Club in Pebble Beach due to renovations at Stanford Golf Course. SDSU last competed at the tournament in 2016, when heavy rains shortened the festivities to two rounds.

The Scarlet and Black will put the finishing touches on its fall schedule with a short drive to Orange County for the UC Irvine Invitational, Oct. 29-30, in Santa Ana, California. Competing as an individual at the event last year, Fernanda Escauriza posted the highest finish of her sophomore campaign with a sixth-place tie out of 71 golfers at Santa Ana Country Club.

After a three-month break, SDSU commences its 2019 spring slate at the 10th annual Bruin Wave Invitational, Feb. 25-26, in San Luis Obispo, California. The Aztecs have played in all nine previous editions of the joint UCLA and Pepperdine tournament, which will be conducted along the Central Coast at San Luis Obispo Country Club for the fourth year in a row.

Two weeks later, SDSU will venture outside of the Golden State for the only time during the spring when it participates in the University of Arizona’s Wildcat Invitational, March 11-12, at Sewailo Golf Club in Tucson. The Scarlet and Black last competed at the tournament in 2012, when it placed ninth at the recently shuttered Golf Club at Vistoso in Oro Valley, Arizona.

After another 14-day hiatus, the Aztecs return to the fairways in earnest when they play host to the aptly named SDSU March Mayhem, scheduled for March 25-27 at The Farms Golf Club in nearby Rancho Santa Fe. Christened in 2013, the Aztecs’ lone home tournament of the campaign will feature a match-play format for the fifth straight year. Last season, the Scarlet and Black instituted a stroke-play phase to determine match-play team seeds for the first time in event history, as Sara Kjellker tied for third on the individual leaderboard as a freshman.

Spalding’s charges will have one last tune-up before the conference tournament when they travel back north to wine country for the Silverado Showdown, April 7-9, in Napa, California. The Aztecs last competed at Silverado Country Club’s North Course for the inaugural installment of the cooperative Oregon-Colorado event in 2015.

For the seventh year in a row, the Mountain West Championship will be contested at Mission Hills Country Club, April 15-17, in Rancho Mirage, California. The Aztecs have boasted the last two individual medalists at the conference tournament in Escauriza (2017) and the since-graduated Mila Chaves (2018).  Collectively, San Diego State will be aiming for its second MW crown after posting three consecutive runner-up finishes.

The Aztecs will be seeking their ninth postseason berth as a team in the last nine years when the NCAA holds its regional championships, May 6-8, across four sites, including Cle Elum, Washington; East Lansing, Michigan, Norman, Oklahoma; and Auburn, Alabama.

If SDSU qualifies for the NCAA finals, it will participate in the national championship series for the first time in program history, May 17-22, at The Blessings Golf Club in Fayetteville, Arkansas.

San Diego State, which finished the 2017-18 campaign with a No. 44 national ranking by Golfstat, returns three starters from a year ago, including Kjellker, who garnered first-team all-Mountain West accolades in her first season on The Mesa, along with Escauriza and Gioia Carpinelli.