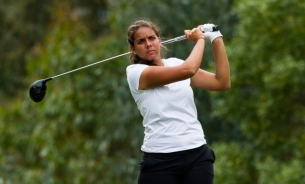 Ecauriza captured medalist honors at the Mountain Championship, held April 17-19 in Rancho Mirage, Calif., where she posted a 6-under-par 210 to become the Aztecs’ first individual champion at a conference tournament. In addition, the native Paraguayan tied the tied the school record for lowest 54-hole score at the MW Championship, along with fellow teammate and compatriot Mila Chaves, who accomplished the feat in 2015.

Escauriza, who arrived on Montezuma Mesa at the semester break in January, has maintained a 74.87 scoring average through five stroke-play events, which ranks third on the team this spring.  At the Meadow Club Intercollegiate in March, she also tied for 15th on the leaderboard, helping the Scarlet and Black claim its second tournament title of the season.

Meanwhile, Blair, who occupies the second spot in the MW with a team-best 72.48 scoring average, is coming off an eighth-place performance at the conference championship.  The Aztec senior has been the team’s No. 1 finisher in five events this year, including a solo second-place effort at the season-opening Branch Law Firm/Dick McGuire Invitational, where she finished alone in second place after posting a 13-under 203 to set a school record for lowest 54-hole score. In addition, Blair established another program standard for 18 holes in that tournament after carding a 64 in the second round, highlighted by nine birdies.

Later in the spring opener, Blair tied for seventh at the highly competitive Northrop Grumman Regional Challenge against a stacked field that featured eight top-30 schools and was the squad’s top golfer at the Meadow Intercollegiate with a solid fourth-place effort to help SDSU secure the crown. For her career, she has recorded 15 top-10 placements, including 10 in the top five.

In addition, Lacey ranks second on the squad and seventh in the MW with a 73.73 stroke average, sporting four top-20 performances on the year, including a solo 17th-place showing at the conference tournament. Last October, she was the Aztecs’ top finisher at the Stanford Intercollegiate and the Las Vegas Collegiate Showdown, tying for second and 15th, respectively, to earn MW Women’s Golfer of the Month honors. Lacey also tied for the team lead with a 3-1 record in match play at the highly competitive SDSU March Mayhem event at The Farms Golf Club and landed in the ninth spot at the Meadow Club Intercolleigate to help lift the Scarlet and Black to its aforementioned team title.

Earlier on Thursday, the 30th-ranked Aztecs secured a berth in the NCAA Lubbock Regional, set for May 8-10 in Lubbock, Texas. The selection marks SDSU’s seventh regional bid as a team in the last eight years.

Golfer of the Year

Freshman of the Year

Coach of the Year