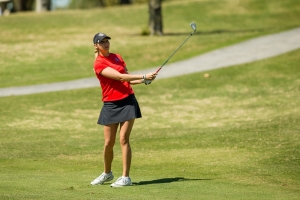 Aztecs tied for 13th after 18 holes

September 24, 2018 (Wolcott, Colo.) - The San Diego State women’s golf team remains tied for 13th place at the Golfweek Conference Challenge after shooting an 18-over-par 306 during the opening round on Monday at Red Sky Golf Club.

With their total, the Aztecs find themselves four shots out of the top 10 heading into Tuesday’s second round on the par-72, 6,320-yard Tom Fazio Course.

Gioia Carpinelli (Boppelsen, Switzerland) turned in the Scarlet and Black’s low card of the day, completing the first round in a tie for 20th after firing a 1-over 73. The SDSU sophomore eased the sting of four bogeys by sinking three birdies, including an impressive drain on the par-5, 510-yard No. 18.

In addition, Sara Kjellker (Hollviken, Sweden) sits one shot behind Carpinelli in a tie for 27th following an opening-round 74. The Aztec sophomore recorded a team-high 12 pars for the day, including five straight on the back nine. However, the native Swede found birdies elusive after successful conversions on the par-4, 415-yard No. 1 and the par-5, 510-yard No. 5.

Elsewhere, Kitty Tam (Hong Kong, China) registered a 5-over 77 to finish the day in a tie for 54th. Despite five bogeys and a double, the Aztec senior drained two birdies on the first and fifth greens, before closing strong with five straight pars.

Rounding out the SDSU starting lineup were junior Fernanda Escauriza (Asunción, Paraguay) and sophomore Cameron Lee (Tustin, Calif.), who both landed in the 80th position after each player logged an 82. Lee’s round was highlighted by birdies on the 10th and 13th, the latter of which ranked as the seventh-toughest hole of the opening round, while Escauriza opened with eight straight pars before losing momentum on the back nine.

UCLA (-11) was one of just three teams to post a collective red figure on Monday, shooting a 277 to open a nine-stroke lead over second-place Campbell (-2), while Pepperdine (-1) remains in third, followed by host Denver (+5) and TCU (+6).

Four golfers are tied atop the individual leaderboard after each shot a 4-under 68, including the UCLA duo of Patty Tavatanakit and Clare Legaspi, along with Denver’s Mary Weinstein and Campbell’s Stacey White.

The Golfweek Conference Challenge continues on Tuesday when San Diego State tees off for the second round alongside Jacksonville and UC Riverside, starting at 10:45 a.m. MT/9:45 a.m. PT.