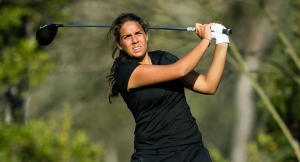 Aztecs finish third in medal play, shut out UC Irvine in first round of match play

March 25, 2019 (Rancho Santa Fe) - The San Diego State women's golf team finished in third place during the medal round at the Lamkin Invitational on Monday, firing a collective 13-over-par 301 at The Farms Golf Club. With their total, the Aztecs secured a berth in the championship bracket of match play, advancing in the draw with a 5-0 triumph over UC Irvine in their first-round duel later in the afternoon.

Fresh off her victory at the Arizona Wildcat Invitational, Gioia Carpinelli (Bopplesen, Switzerland) continued her strong spring campaign, leading all 64 golfers in the medal round with a 2-under-par 70.

With her total, the SDSU sophomore was the only player to post a red figure in the round, finishing two shots in front of Pepperdine’s Momoka Kabori and Hannah Haythorne, as well as San José State’s Andrea Oon and Abegail Arevalo, who all tied for second at even-par 72.

In addition, junior Fernanda Escauriza (Asunción, Paraguay) landed in the seventh spot with a 2-over 74, three strokes in front of freshman April Ranches (San Diego, Calif.), who tied for 15th at 5-over 77, while senior Kitty Tam (Hong Kong, China) wound up in the 31st position after carding an 8-over 80.

After completing a third-place standing, SDSU squared off against UC Irvine in their first match of tournament, winning all five individual encounters.

Tam was the Aztecs’ biggest winner of the round, wasting no time in dispatching Cameron Lee by a count of 8&6, while Escauriza took care of business as well with a 4&3 conquest of Maddie Riggs.

San Diego State will square off against California in the second round of the championship bracket on Tuesday, beginning with a shotgun start at 8:30 a.m. on holes 4-6.