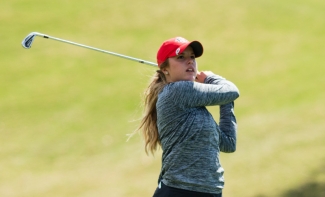 March 26, 2018 (Rancho Sante Fe) - The San Diego State women’s golf team finished in seventh place during the medal round at the SDSU March Mayhem event on Monday, firing a collective 14-over-par 302 at The Farms Golf Club. With their total, the Aztecs secured a berth in the championship bracket of match play, but fell to Texas by a count of  3 ½ - 1 ½ in their first-round battle later in the afternoon.

Sara Kjellker (Hollviken, Sweden) was SDSU’s top finisher in medal play, carding a 1-under 71 to tie for third on the individual leaderboard with USC teammates Amelia Garvey and Alyaa Abdulghany and California’s Jiyoon Jang.

With her total, the Aztec freshman finished the morning just three shots behind front-runner Allisen Corpuz of USC (-4), while UCLA’s Mariel Galdiano took second. Kjellker offset two bogeys with a trio of birdies, including a successful drain on the par-5, 474-yard 18th, helping the Scarlet and Black lock up a spot in the championship bracket for match play.

Senior Haleigh Krause (Eugene, Ore.) completed stroke play with a 3-over 75 to tie for the 24th position, while fellow classmate Georgia Lacey (Del Mar, Calif.) landed one shot behind in the 30th spot at 4-over 76.

Rounding out the SDSU lineup were senior Mila Chaves (Asuncion, Paraguay), who tied for 44th with an 8-over 80, while freshman Gioia Carpinelli (Boppelsen, Switzerland) stumbled to an uncharacteristic 83 to finish in 60th.

Kjellker was the lone Aztec to emerge triumphant in the team’s loss to Texas in match play, where she defeated the Longhorn’s Agathe Laisne by a 3&1 tally, while Lacey was all square in her duel with  Maddie Luitwieler.

In addition, Greta Voelker slipped past Chaves by a 2&1 margin, while Carpinelli fell short to Emilee Hoffman 5&3. Krause also found herself on the wrong side of a 6&5 decision claimed by Kaitlyn Papp.

SDSU will now square off against Colorado in the consolation bracket on Tuesday, beginning with a shotgun start at 8:30 a.m. on holes 10-12.  The Buffaloes experienced a 4-1 setback to Iowa State in their first-round match on Monday.