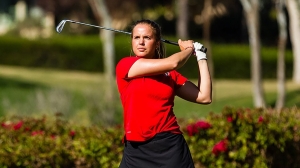 May 6, 2019 (Cle Elum, Wash.) - The San Diego State women’s golf team finds itself in 11th place at the NCAA Cle Elum Regional after shooting a combined 8-over-par 296 on Monday during the opening round at Suncadia Resort’s Tumble Creek Club.

With their score, the Aztecs remain six shots behind sixth-place UCF (+1), as the top six teams and three low individuals not on those squads advance out of regional competition into the NCAA championship series, scheduled for May 17-22, in Fayetteville, Ark.

In between lie Oregon State, Old Dominion and Ohio State, which are tied for seventh at 5-over 293, while Oregon (+7) occupies the 10th spot heading into Tuesday’s second round on the par-72, 6,306-yard course layout.

Individually, SDSU was paced by Sara Kjellker (Hollviken, Sweden), who fired a 2-under 70 to finish the day in a six-way logjam for eighth place. Starting on the 10th tee, the Aztec sophomore notched four birdies, including an impressive drain on the par-4, 380-yard No. 1, which ranked as the most difficult hole of the opening round. However, a pair of bogeys at the par-3 seventh and the par-4 ninth prevented a loftier perch.

Despite the hiccups, Kjellker finds herself four strokes in back of UCF’s front-runner Ana Laura Collado, who posted a 66 to grab a one-shot advantage over Oregon’s Kathleen Scavo (-5), while Northwestern’s Stephanie Lau (-4) and Washington’s Rino Sasaki (-4) share the third position, followed by Arkansas’ Maria Fassi (-3), USC’s Gabriela Ruffels (-3) and Ohio State’s Yukie Sasaki (-3).

In addition, Fernanda Escauriza (Asunción, Paraguay) completed the first 18 holes in a tie for 21st after logging a 72. The SDSU junior offset four bogeys with four birdies of her own, including a successful conversion on the par-4, 380-yard No. 5, which ranked as the second-toughest hole on Monday.

Elsewhere, Gioia Carpinelli (Boppelsen, Switzerland) registered four birdies as well, but wound up tumbling down to the 57th spot thanks to a 76. The Aztec sophomore also found success on the No. 1 green and later got back to even-par following her final drain of the day at the par-5, 525-yard No. 4. However, four consecutive bogeys derailed her momentum.

Kitty Tam (Hong Kong, China) was the fourth SDSU starter to make four birdies, including back-to-back conversions at the par-5 14th and the par-4 15th, which leveled her round. However, the back nine started ominously for the senior, who logged consecutive bogeys on the first and second holes followed by an untimely triple bogey on No. 5, ultimately settling for a 78 to finish the day in a tie for 74th.

The Aztec delegation was also represented by senior Daniela Anastasi (La Jolla, Calif.), who landed in the 80th position after recording a 79. The La Jolla High alumna countered a bogey at the par-4 10th with a birdie-4 at No. 15 to get back to even for the round. However, double bogeys on a pair of additional par-5s at No. 18 and No. 4 proved too much to overcome.

USC (-7) vaulted to the top of the team standings, while Northwestern (-4) lurks in second, followed by Washington (-3), Arkansas and San José State (-1).

The NCAA Cle Elum Regional continues on Tuesday with second-round action when San Diego State tees off alongside Oregon and South Carolina.