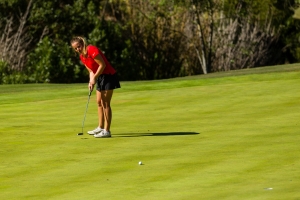 Kjellker, who leads the Aztec contingent of seven unattached players, landed in a tie for second after carding a 36-hole total of 5-under-par 139 on the par-72, 6,042-yard course layout. The Aztec sophomore vaulted to the top of the leaderboard during the morning session on the strength of a collegiate-best 66, but slipped one notch in round two after posting a 74.

Kjellker offset two bogeys with a team-high eight birdies in the opening round, including an impressive drain on her finishing hole, the par-3, 160-yard No. 12, which ranked as the sixth-toughest hole of the day. However, the native Swede was unable to produce the same magic in the afternoon, recording just two birdies against three bogeys.

Despite the stumble, Kjellker sits in a three-way tie for the second spot, along with Cal Baptist’s Erica Wang and Cal Poly namesake Vanessa Wang, one stroke behind another Mustang golfer Caroline Cantlay (-6).

Meanwhile, Lee occupies the fifth position at 4-under 140, joining the Santa Clara duo of Emily Sumner and Marni Murez. The SDSU sophomore fired rounds of 71 and a career-best 69 to keep with striking distance of the front runners. Starting on No. 15, Lee opened the morning round with consecutive birdies, including a successful make on the par-4, 340-yard 16th, which ranked as the fourth-most difficult hole on Monday. She also recorded two drains on the back nine to somewhat ease the sting of three bogeys. The Orange County product promptly minimized the damage in afternoon, logging four additional birdies against only one bogey to climb two places in the standings.

Elsewhere, Gioia Carpinelli (Boppelsen, Switzerland) and Daniela Anatasi (La Jolla, Calif.) remain tied for 15th after each shot a 1-over 145. Carpinelli turned in cards of 73 and 72, sinking seven birdies overall, including five in the second round. The Aztec sophomore finished strong with a birdie on the par-5, 535-yard No. 11 to jump eight places on the leaderboard, but three prior bogeys, as well as a double on the par-3 14th, prevented a steeper ascent.

Despite firing nearly identical rounds of 72 and 73, respectively, Anastasi slipped five places between the morning and afternoon. The SDSU senior countered three bogeys with a trio of birdies in round one before adding four more drains after lunch. However, double bogeys at the par-5 No. 15 and No. 11 hastened her drop.

Fernanda Escauriza (Asunción, Paraguay), who tied for sixth at the event last year, shook off some early rust and finished the day in a tie for 39th at 6-over 150. The Aztec junior staggered to a 77 in round one, converting just one birdie at the par-5, 537-yard No. 5, which ranked as the third-toughest hole on Monday. Escauriza trimmed four shots of her total with a 73 in the afternoon, buoyed by another birdie on the fifth green to go with drains at No. 7 and No. 15. After experiencing a bogey on the par-4 ninth, the Paraguayan native closed with a rush, notching four straight pars to climb 15 places on the leaderboard.

However, Kitty Tam (Hong Kong, China) suffered the opposite fate, plunging 13 places into a tie for 42nd at 7-over 151 on rounds of 74 and 77. The SDSU senior opened strong with a birdie on the par-3, 400-yard No. 3, which ranked as the most difficult hole of the day. Tam also registered three drains on her final four holes; however, six bogeys in the interim proved too much to overcome. The Hong Kong native quickly found birdies elusive in the afternoon, as five additional bogeys sandbagged her round.

The SDSU delegation also featured freshman April Ranches (San Diego, Calif.), who made her first appearance in a Scarlet and Black uniform. The Serra High alumna landed in a tie for 62nd at 13-over 157 on rounds of 75 and 82. Ranches carded three birdies on the day, including back-to-back conversions at No. 18 and No. 1 in round one.

The UC Irvine Invitational concludes on Tuesday with the San Diego State crowd teeing off for the final round starting at 8:30 a.m. on hole No. 10.

This tournament had great talent.