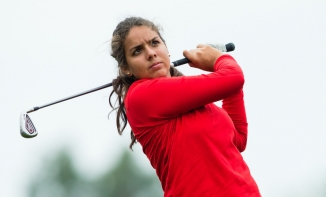 Aztecs remain in 11th place after Friday’s opening round

Photo:  Fernanda Escauriza shot an opening-round 72 on Friday at the PING/ASU Invite on Friday.  Courtesy goaztecs.com

April 7, 2017 (Tempe, Ariz.) - The San Diego State women’s golf team finds itself in 11th place after shooting a 10-over-par 298 on Friday during the opening round of the PING/ASU Invitational at Karsten Golf Course. With their score, the Aztecs find themselves nine shots behind fifth-place UNLV (+1) heading into Saturday’s second round on the par-72, 6,337-yard track.

Individually, SDSU was led by Fernanda Escauriza (Asunción, Paraguay), who fired an even-par 72 to finish the day in a tie for 18th place along with seven other players. The Aztec freshman found herself at 4-over for the round after making bogey on the par-4 13th. However, Escauriza closed with a rush, carding birdies on four of her last five greens, including an impressive conversion on the par-4, 370-yard 18th, which ranked as the third-most difficult hole of the day.

In addition, Sirene Blair (South Jordan, Utah) remains one stroke in back of Escauriza in a tie for 26th after shooting a 1-over 73 on Friday. The Aztec senior led the squad with 13 pars to go with a pair of birdies; however, three bogeys prevented a loftier perch.

Meanwhile, Georgia Lacey (Del  Mar, Calif.) sits in a tie for 43rd on the heels of an opening-round 75. The Torrey Pines High alumna sank three birdies, including a successful drain on the par-4, 383-yard No. 4, which ranked as the fifth-most difficult hole of the round. Lacey also circled her scorecard on No. 8 and No. 14 to go with six additional pars on the back nine. However, four bogeys and a double-bogey at the par-3 sixth proved too much to overcome for the day.

Elsewhere, Haleigh Krause (Eugene, Ore.) finds herself in a tie for 60th after firing a 78 on Friday. The SDSU junior was even through 10 holes, offsetting one bogey with a birdie at the par-4, 380-yard No. 3. However, Krause faded down the stretch after suffering four bogeys and a double bogey in a six hole-span from No. 11-16.

Rounding out the Aztec starting lineup was senior Natalie Vivaldi (Oceanside, Calif.), who landed in a tie for 68th after logging a 79. The Rancho Buena Vista High product found birdies elusive on Friday and was unable to ease the sting of seven bogeys.

SDSU was also represented by Kitty Tam (Hong Kong, China), who sits in the 78th position after shooting an 83, highlighted by a birdie at the par-3, 157-yard No. 16, which ranked as the sixth-toughest hole of the day.

After 18 holes, Arizona State and Baylor find themselves share the top spot at 10-under 278, while Washington and Arizona are tied for third at 1-under, followed by fifth-place UNLV (+1). Oregon State occupies the sixth position at 3-over, while Kansas State and SMU are tied for seventh at 6-over.

On the individual leaderboard, ASU’s Monica Vaughn fired an 8-under 64 to grab a four-shot lead over Baylor’s Dylan Kim (-4), while the Sun Devils’ Roberta Liti, Kansas State’s Paige Nelson and Baylor’s Fiona Liddel are all tied for third at 3-under.

The PING/ASU Invitational continues on Saturday when San Diego State tees off alongside Missouri and LSU for second-round action, beginning at 8 a.m. PDT on hole No. 10.

* – competing as an individual