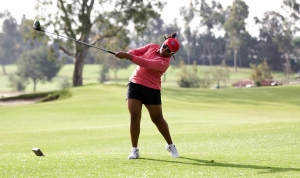 October 11, 2019 (Stanford) - The San Diego State women’s golf team completed the first round of the Stanford Intercollegiate in 16th place after shooting an aggregate 16-over-par 300 on Friday at the par-71, 6,195-yard Stanford Golf Course.

With their total, the Aztecs find themselves seven shots behind the ninth-place trio of Northwestern, Pepperdine and San José State after each of those schools carded a 9-over 293.

Front-runner Arizona State (-6) was one of only four teams to record a red figure on Friday, while host Stanford (-4) occupies the second spot, followed by USC (-2), Oregon (-2) and Arizona (+1).

Individually, SDSU was paced by Bernice Olivarez Ilas (Ayala Alabang, Philippines), who landed in the 45th position after firing an opening-round 74. Starting on the 10th tee, the Aztec freshman posted birdies on a pair of par-5s at No. 12 and No. 7; however, five bogeys proved too much to overcome.

In addition, senior Fernanda Escauriza (Asunción, Paraguay) and sophomore April Ranches (San Diego, Calif.) remain one shot behind Olivarez Ilas in a tie for 56th after each fired a 75.

Despite two double bogeys on the front nine, Escauriza was just 1-over for the day after draining a birdie at the par-4, 361-yard 15th, followed by an eagle on the par-5, 501-yard No. 1. However, three bogeys on her final six holes derailed her momentum.

Ranches’ round began ominously with a double bogey at the par-4 10th, but the Serra High alumna regrouped immediately with a birdie at No. 11. She also registered a team-high 13 pars, including six straight down the stretch, which helped offset three additional bogeys.

Elsewhere, Ella Adams (Adelaide, Australia) sits one stroke in back of the aforementioned SDSU duo in a tie for 65th after logging a 76. Despite sinking three birdies, including a successful conversion on the par-4, 385-yard No. 6, which ranked as the fifth-toughest hole of the day, the Aztec junior was plagued by six bogeys and a double bogey at the par-3 No. 14.

Gioia Carpinelli (Boppelsen, Switzerland), who ultimately settled for a 78, experienced a similar fate with three birdies of her own, but a rash of six bogeys and consecutive double bogeys on the second and third greens dropped her into a tie for 79th.

Angelina Ye of Stanford finds herself atop the leaderboard after shooting a 4-under 67, while six golfers fired a 68 to create a logjam for second, including Arizona State’s Linn Grant, Stanford’s Aline Krauter, Arizona’s Vivian Hou, Liyana Durisic of Iowa State, Tze-Han Lin of Oregon and Arizona State’s Raquel Olmos.

The Stanford Intercollegiate resumes on Saturday when San Diego State tees off for the second round alongside Pepperdine and Oregon starting at 7:30 a.m. on hole No. 1.