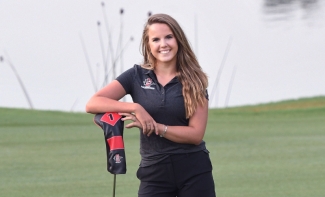 Photo:  Sara Kjellker carded the Aztecs' low round on Tuesday with a 1-over 72.

Along with Mountain West rival UNLV, the Aztecs have amassed a 36-hole total of 47-over 615 heading into Tuesday’s final round on the par-71, 6,017-yard loop.

Individually, Sara Kjellker (Hollviken, Sweden) climbed 15 places into a tie for 17th at 4-over 146 after carding SDSU’s low round of the tournament with a 72. Starting on the 10th tee, the Aztec freshman offset five bogeys with a team-high four birdies, including a successful conversion on the par-4, 405-yard No. 14, which ranks as the toughest hole of the week thus far.

With her total, Kjellker sits seven shots off the pace, trailing Arizona State’s front-runner Olivia Mehaffey (-3), who finds herself clinging to a one-stroke lead over Texas’ Kaitlyn Papp (-2) and UCLA’s Patty Tavatanakit (-2), while fellow teammate Bethany Wu, Arizona’s YuSang Hou and Lauren Stephenson of Alabama are all tied for fourth at even-par.

The remainder of the SDSU contingent lost ground on Tuesday, including Gioia Carpinelli (Boppelsen, Switzerland), who tumbled 25 spots into a tie for 64th at 13-over 155 after logging an 80 on Monday. The Aztec freshman was just 1-over at the turn thanks to seven pars and her lone birdie of the round on the par-4 11th; however, four bogeys and two doubles on the back nine precipitated her drop.

Despite firing her second straight 78, Fernanda Escauriza (Asunción, Paraguay), fell 10 places into a tie for 74th at 14-over 156. The SDSU sophomore was also 1-over midway through her round on the strength of two birdies at No. 10 and No. 17. Escauriza also notched a successful make on her third-to-last green at the par-5, 505-yard No. 7, but three bogeys and two doubles after the turn proved too much to overcome.

Elsewhere, senior Mila Chaves (Asunción, Paraguay) remains two shots in back of her Aztec compatriot in a tie for 81st at 16-over 158 after shooting an 82. Chaves found birdies elusive on Monday, as did fellow classmate Georgia Lacey (Del Mar, Calif.), who finished the round in a tie for 95th at 24-over 166 after recording an uncharacteristic 88.

Alabama and UCLA share the lead in the team standings at 8-over after each posted a combined 284 on Monday, while Arizona (+9), Arizona State (+15) and Stanford (+19) round out the top five.

The Northrop Grumman Regional Challenge concludes on Tuesday when the Aztecs tee off alongside UNLV for the final round, beginning with a shotgun start at 8:30 a.m.