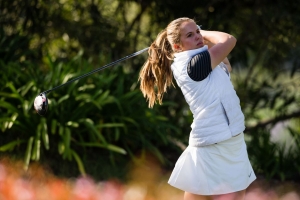 March 26, 2019 (Rancho Santa Fe) - The San Diego State women's golf team fell short in its match against California on Tuesday during the second round of the championship bracket, falling to the Golden Bears by a score of 3.5-1.5 at The Farms Golf Club.

With their setback, the Aztecs will face Sacramento State for third place on Wednesday, beginning with a shotgun start at 8:30 a.m. The Hornets were defeated by Vanderbilt in their second-round match as well, 4.5-0.5

Sara Kjellker (Hollviken, Sweden) was lone SDSU player to record a victory on the day with a 2&1 decision over Maria Herraez Galvez. The duel was a see-saw affair, as the two golfers were all square after each carded a par at No. 2 on their back nine. However, the Aztec sophomore vaulted in front for good with a birdie at No. 3 and promptly clinched the match with another par on the next green, while her Cal adversary made bogey.

In addition, Fernanda Escauriza (Asunción, Paraguay) finished all square in her encounter with Katherine Zhu. The SDSU junior was 1-up after notching consecutive pars at No. 5 and 6, while her Bear opponent went bogey-par. However, Zhu leveled the match with a birdie on the seventh hole before the two players closed with pars on their finishing green at No. 8.

The rest of the Scarlet and Black contingent was unable to seize the upper hand in their respective matches, including Gioia Carpinelli (Boppelsen, Switzerland), who faltered down the stretch against Cindy Oh. Sitting 1-down after draining a birdie on No. 18, the Aztec sophomore was unable narrow the gap, suffering untimely bogeys on the first and second greens while her Cal counterpart made two pars to clinch the win.

Elsewhere, freshman April Ranches (San Diego, Calif.) stumbled out of the gates in her battle with Amina Wolf before dropping a 4&2 decision, while Kitty Tam (Hong Kong, China) experienced an early exit against Marianne Li, who claimed a 6&5 victory.

Lamkin Invitational concludes on Wednesday, with Vanderbilt facing Cal in the championship match, while Pepperdine takes on San José State in the fifth-place bracket. In addition to the Aztecs' battle with Sac State, Texas Tech will lock horns with UC Irvine for seventh place, while the round robin bracket features UC Davis vs. Portland and Central Arkansas against Augusta.