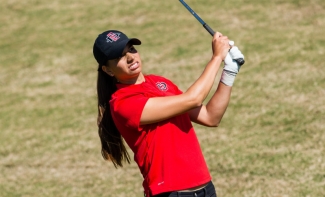 Aztecs lose to Bruins on tiebreaker at SDSU March Mayhem

Photo:  Mila Chaves was a 5&3 winner in her match vs. UCLA on Wednesday.  Courtesy goaztecs.com

March 28, 2018 (Rancho Santa Fe) - The San Diego State women’s golf team wrapped up its lone home tournament of the year on Wednesday with a narrow setback to top-ranked UCLA in the fifth-place match of the SDSU March Mayhem event at The Farms Golf Club.

Despite splitting two individual matches and halving another, the Aztecs lost a tiebreaker when the Bruins posted a greater margin of victory (9-8) in its wins.

Mila Chaves (Asunción, Paraguay) was the first player off the course for the Scarlet and Black after posting a 5&3 decision over Clare Legaspi. Starting on hole No. 8, the SDSU senior never trailed in her dual, offsetting a bogey on the 12th green with a birdie on the par-5 No. 18 to go three holes up. The reigning South American Women’s Amateur champion closed with four straight pars, while her Bruin adversary stumbled with bogeys at No. 3 and No. 4 to end the match.

Gioia Carpinelli (Boppelsen, Switzerland) also emerged victorious with a 3&2 triumph over Erin Choi. The Aztec freshman also led throughout the day, draining four clutch birdies, including an impressive conversion on the par-4 third to secure the win.

Meanwhile, SDSU’s Georgia Lacey (Del Mar, Calif.) ended the day all square in her battle with Mariel Galdiano.  Starting on the ninth tee, the Aztec senior sank a team-high six birdies, including back-to-back drains on the third and fourth greens to go 1-up with four holes left to play. Lacey notched three pars during that span, but made a costly bogey at the par-4 seventh, as her UCLA counterpart closed with four straight pars to level the score.

Elsewhere, Sara Kjellker (Hollviken, Sweden) fell to Bethany Wu by a 4&3 tally. Starting on No. 8, the two golfers were even through five holes, logging matching birdies at No. 9 and No. 11. However, the SDSU freshman dropped the four of the next five holes and was unable to recover.

Rounding out the Aztec contingent was Haleigh Krause (Eugene, Ore.), who fell to Patty Tavatanakit by a 5&3 count. Starting on the seventh tee, the SDSU senior trailed by just one through 10 holes, but recorded an untimely bogey on the 17th, while her Bruin opponent sank birdies at No. 18 and No. 1 to seize control.

USC took home the championship trophy for the third straight year at the March Mayhem tournament with a 5-0 blanking of Texas, while Iowa State edged Northwestern, 3-2, for third place. In the seventh-place bracket, Colorado downed California on tiebreaker as well (6-3) after the two squads posted 2.5 points apiece.

San Diego State will have one last tune-up before the Mountain West Championships when it ventures to the Lone Star State for the inaugural Bruzzy Challenge April 2-3 at Maridoe Golf Club in Carrollton, Texas.