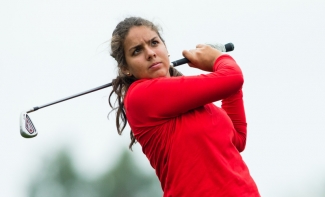 Aztec sophomore finishes tournament at 2-over 218

With her total, the Aztec sophomore completed the tournament with a collective 2-over 218 to lead a quartet of SDSU individual competitors in the team’s fall schedule finale.

Escauriza, who began the day in fifth place, was 1-under for the round after sinking two birdies on the par-3, 150-yard No. 14 and the par-5, 440-yard 18th to offset a bogey-5 on her first green at No. 10. However, the reigning Mountain West individual champion was unable to gain ground on the leaders after posting two additional bogeys on the back nine, as well as a double bogey-5 at No. 9.

As a result, Escauriza slid down into a tie for sixth along with Long Beach State’s Haley Tygret and Pepperdine’s Momoka Kabori, finishing 11 strokes behind medalist Katrina Prendergast of Colorado State (-9), who posted a three-shot victory over Idaho’s Sophie Hausmann (-6), while the LBSU duo of Euna Pak (-5) and Cara Barker (E) took fourth and fifth, respectively.

In addition, junior Daniela Anastasi (La Jolla, Calif.) registered her first top-20 finish in an SDSU uniform, tying for 14th with a combined 6-over 222. The La Jolla High product recorded the Aztecs’ lowest round of the day with a 71 to climb 16 places on the leaderboard.

Anastasi led the team with four birdies, including a successful conversion on the par-4, 276-yard No. 2, which ranked as the second-toughest hole of the final round, before finishing with another drain on her last green at No. 9.

Cameron Lee (Tustin, Calif.) was not as fortunate, however, tumbling seven places into a tie for 37th at 13-over 229 after shooting a final-round 78. The SDSU freshman also notched a birdie on the ninth hole, her only conversion of the day, but four bogeys and a triple-bogey-6 at No. 12 precipitated her drop.

Conversely, Kitty Tam (Hong Kong, China) managed to leap six spots into a tie for 56th at 22-over 238 despite posting six bogeys en route to a final-round 77. The Aztec junior registered just one birdie on the afternoon at the par-4, 340-yard 16th to go with 11 pars.

SDSU did not compete as a team at the UC Irvine Invitational, which was won by Long Beach State with a 15-over 879, while Pepperdine (+17) finished second, followed closely by Colorado State (+18).

San Diego State will break from competition for the next three-and-a-half months before returning to action for the Northrop Grumman Regional Challenge, Feb. 11-12, 2018, in Palos Verdes Estates, California.