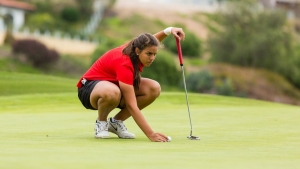 The Aztecs, who posted their lowest collective score of the week, climbed two places in the standings to complete the tournament with a 54-hole total of 43-over 907 in their final tune-up before the Mountain West Championship.

SDSU sported two top-20 individual competitors, including Fernanda Escauriza (Asunción, Paraguay), who landed in the 18th position at 6-over 222 after carding a 74. Starting on the ninth tee, the Aztec junior was 1-under for the day following her team-high fourth birdie on the par-4, 309-yard No. 4. However, three bogeys on her final four holes knocked her out of a potential top-10 placement. Despite the stumble, Escauriza still managed her fourth top-20 finish of the season and third of the spring.

In addition, Sara Kjellker (Hollviken, Sweden) ended the week one shot behind Escauriza, tying for 19th at 7-over 223 after firing a team-best 72 during the final round. The SDSU sophomore offset three bogeys with a trio of birdies, including back-to-back conversions on the 16th and 17th greens. She also a added an impressive drain on the par-4, 344-yard No. 8, which ranked as the second-toughest hole of the event. Kjellker’s strong closing stretch included six pars as well, hastening a jump of 13 places on the leaderboard.

Gioia Carpinelli (Bopplesen, Switzerland) also vaulted 13 spots in the standings into a tie for 71st at 19-over 235 after recording her lowest round of the week with a 75. Starting on the 12th tee, the Aztec sophomore endured a bogey at No. 14 and a double bogey at No. 16 before reeling off 10 consecutive pars. She soon added a birdie on the ninth green followed by another par; however, a bogey on her finishing hole at the par-3 No. 11 prevented a steeper ascent.

With her total, Carpinelli finished three shots behind teammate Kitty Tam (Hong Kong, China), who slipped five places into a tie for 59th at 16-over 232 after logging a 78. The SDSU senior stumbled out of the gates with five bogeys on her first eight holes before sinking a birdie on the par-5, 503-yard No. 18.  Tam notched six pars on the back nine as well as a birdie on the par-5 ninth, but a double bogey at No. 3 and bogey at No. 6 precipitated her drop on the leaderboard.

April Ranches (San Diego, Calif.) rounded out the Aztec starting five with a tie for 82nd at 238 after shooting an 82 on Tuesday. Despite nine pars, including six on her back nine, the SDSU freshman experienced a dearth of birdies and was unable to overcome a rash of eight bogeys and one double bogey.

With three golfers among the individual top four, Northwestern (+6) held off a late charge by USC (+10) for the team title after the Women of Troy posted the only combined red figure of the final round with a 2-under 286. In addition, fellow Pac-12 members Stanford (+17), Oregon (+20) and Washington (+22) comprised the rest of the top five schools, respectively.

Northwestern’s Brooke Riley captured medalist honors with a 1-under-215, edging co-runners-up Natasha Andrea Oon of San José State and Malia Nam of USC by one shot, while fellow Wildcat teammates Stephanie Lau and Kelly Sim tied for fourth at 1-over, along with Oregon’s Kathleen Scavo.

San Diego State will begin preparations for the 2019 Mountain West Championship, set for April 15-17 in Rancho Mirage, Calif. For the seventh straight year, the conference tournament will be conducted on the Dinah Shore Course at Mission Hills Country Club.