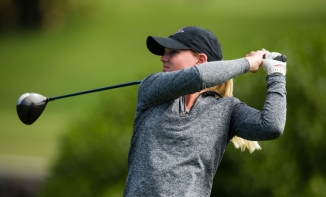 Photo:  Georgia Lacey posted SDSU's low card of the day with a 72 in the final round.  Courtesy goaztecs.com

September 12, 2017 (Alberquerque) - The San Diego State women’s golf team concluded its season-opening tournament with a fifth-place standing at the Branch Law Firm/Dick McGuire Invitational after shooting a 10-over-par 294 on Tuesday during the final round at the par-72, 6,317-yard UNM Championship Course.

Despite an eight stroke increase in their collective total from the second round, the Aztecs maintained their grasp on the fifth spot, completing the event at 12-over-par 876. With the result, SDSU finished just seven shots behind Colorado and Stanford, which tied for third at 5-over, while Oklahoma State (-1) captured the team title by two strokes over runner-up Northwestern (+1).

Individually, all five Aztec starters finished within four strokes of one another, including the trio of Georgia Lacey (Del Mar, Calif.), Sara Kjellker (Hollviken, Sweden) and Gioia Carpinelli (Boppelsen, Switzerland), who tied for the 25th position at 4-over 220.

Lacey carded SDSU’s low round of the day, posting an even-par 72 to climb 21 places on the leaderboard. The SDSU senior started ominously with a bogey on her first hole—the par-4 fifth—before recovering with a team-high five birdies to offset two additional bogeys and a double bogey. Among Lacey’s drains was a successful conversion on the par-4, 407-yard No. 10, which ranked as the second-toughest hole of the final round.

Conversely, Kjellker recorded just one birdie on the day at the par-5 14th, but managed a team-high 15 pars, including eight straight to open the round. The Aztec freshman notched just two blemishes on her scorecard, a double-bogey at No. 12 and a bogey at No. 17 before closing with four additional pars to jump four places in the standings.

Meanwhile, Carpinelli slipped two spots after posting a 75 on Tuesday. The SDSU freshman was 1-under for the day after sinking a birdie on the par-4 17th; however, a bogey on No. 18 followed by a triple bogey on her final hole—the par-3 third—thwarted her advance into the top 20.

Haleigh Krause (Eugene, Ore.) also experienced a reversal of fortune, tumbling 15 places into a tie for 44th at 7-over 223 on the heels of a final-round 77. Despite 11 pars, the Aztec senior stumbled out of the gates with three bogeys on her front nine and was unable to recover. After the turn, Krause birdied No. 14, but three additional bogeys down the stretch hastened her drop.

Elsewhere, Mila Chaves (Asunción, Paraguay) moved up nine places up the standings into a tie for 52nd at 9-over 224 after matching Kjellker with a 74 on Tuesday. Among the highlights for the SDSU senior were back-to-back birdies on the 14th and 15th greens, the latter of which ranked as the fifth-most difficult hole of the final round.

The Aztec delegation also included junior Daniela Anastasi (La Jolla, Calif.), an unattached golfer who tied for 74th at 13-over 229 after firing a 76 over the final 18 holes.

Stanford’s Andrea Lee carded a 67 on Tuesday to share medalist honors with Arizona’s Bianca Pagdanganan at 8-under 208, while Oklahoma State’s Kenzie Neisen took third with a 4-under 212, followed by Northwestern’s Hannah Kim (-3).

San Diego State will have nearly two weeks off from competition before returning to the fairways for the Golfweek Conference Challenge, Sept. 25-27, in Wolcott, Colo. The Aztecs are the defending two-time tournament champion.