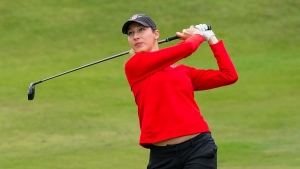 Despite tying for the fourth-best team score of the final round with a 10-over 298, the Aztecs were unable to gain ground on the leaders, falling  three shots shy of third-place Georgia (+28) and 13 strokes in back of runner-up Oregon (+22), while Stanford (-4) was the runaway winner of the inaugural tournament.

Indvidually, SDU was led by juniors Gioia Carpinelli (Boppelsen, Switzerland) and Sara Kjellker (Hollviken, Sweden), who tied for seventh at 5-over 221 after each carded a 73 on Tuesday. Both players completed nearly identical scorecards, sinking two birdies apiece to offset a trio of bogeys on the par-72, 6,141-yard course layout.

Carpinelli got to even-par for the round after recording an impressive drain on the par-4, 400-yard No. 12, which ranked as the third-toughest hole of the week. The Swiss national soon followed with five consecutive pars but closed on a sour note thanks to a bogey at the par-5 18th.

Kjellker was also a model of consistency for the most part, sinking birdies on the first and ninth greens to go with 14 pars, including seven straight to end the round. However, back-to-back bogeys at No. 10 and 11 proved too much to overcome.

Still, the duo managed to move up one notch on the leaderboard, tying for the top spot in the Aztec lineup for the second time this season after both tied for the eighth position at the Branch Law Firm/Dick McGuire Invitational last month in New Mexico.

Elsewhere, Ella Adams (Adelaide, Australia) completed her first start in a Scarlet and Black uniform with a 13-over 229, tying for 26th after logging a final-round 77. The junior transfer from Kansas State posted two birdies at the par-3 ninth and at No. 18 after making seven pars on the front nine. However, two bogeys and a pair of double bogeys following the turn hastened a drop of five places in the standings.

On the flip side, Bernice Olivarez Ilas (Ayala Alabang, Philippines) jumped five spots into a tie for 33rd at 15-over 231 on the heels of a 75. The SDSU freshman sank one birdie at the par-5 451-yard No. 5 and posted 13 pars, including six straight on the back nine. However, bogeys on her final two holes prevented a steeper ascent.

Rounding out the Aztec starting five was Fernanda Escauriza (Asunción, Paraguay), who tumbled 17 places into a tie for 43rd at 18-over 234 following an atypical 81. The SDSU senior found birdies elusive on Tuesday, suffering five bogeys and two double bogeys, which precipitated her fall.

The Aztecs were also represented by individual competitors April Ranches (San Diego, Calif.) and Daniela Anastasi (La Jolla, Calif.). Ranches finished alone in 19th at 10-over 226 after shooting a final-round 74. The SDSU sophomore registered 14 pars and a birdie on the par-4 No. 7 to offset a trio of bogeys.

San Diego State will compete in the final event of its fall slate in 10 days when it travels north to the Bay Area for the Stanford Intercollegiate Oct. 11-13 in Stanford, California.