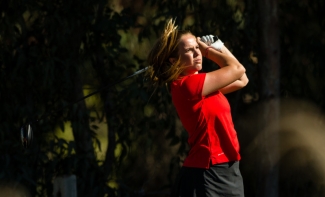 Photo:  Sara Kjellker logged her fourth top-10 placement of the year at the Bruzzy Challenge in Carrollton, Texas.  Courtesy goaztecs.com

April 3, 2018 (Carrollton, Texas) - The San Diego State women’s golf team was unable to gain ground at the Bruzzy Challenge on Tuesday, finishing in seventh place after posting a collective 25-over-par 313 during the final round at Maridoe Golf Club.

Enduring high winds and a thunderstorm delay, the Aztecs completed the inaugural tournament with a 54-hole total of 59-over 923 on the par-72, 6,335-yard course layout. With its score, the Scarlet and Black finished eight shots behind fourth-place TCU (+51) and six strokes in back of Brigham Young (+53) for the fifth position in its final tune-up before the Mountain West Championships.

None of the golfers in the 80-player field finished in red figures for the week, as average individual scores ballooned from 77.75 to 80.28 between the second and third rounds.

Nevertheless, SDSU’s Sara Kjellker (Hollviken, Sweden) climbed two places into a tie for eighth place on the leaderboard at 10-over 226 after carding a final-round 76. Starting on the eighth tee, the Aztec freshman sank birdies at No. 9 and No. 14; however, four bogeys and a double at No. 11 prevented a steeper ascent.

Still, Kjellker emerged as the team’s No. 1 finisher for her fourth top-10 placement of the year, completing the tournament 10 shots behind medalist Maddie Szeryk of Texas A&M (E), who recorded a four-stroke victory over TCU’s Greta Bruner (+4), while Houston’s Megan Thothong (+6) took third.

Conversely, Mila Chaves (Asunción, Paraguay) ended the week with a solo 12th-place standing at 12-over 228, slipping two notches after firing a 78. The SDSU senior found herself at 8-over for the round following a string of three straight bogeys at No. 17, No. 18 and No. 1. However, the reigning South American Women’s Amateur champion closed with a flurry, logging five pars and two birdies, including a successful drain on the par-4, 331-yard No. 5, which ranked as the fifth-toughest hole of the event.

In addition, Gioia Carpinelli (Boppelsen, Switzerland) landed in a tie for 24th, four shots in back of Chaves at 16-over 232, on the heels of a final-round 80. The Aztec freshman found birdies elusive on Tuesday, with six bogeys and a double at the par-4 18th precipitating a drop of four places on the leaderboard.

Likewise, fellow classmate Cameron Lee (Tustin, Calif.) tumbled four spots in the standings, finishing her first collegiate varsity start in a tie for 58th at 25-over 241 after shooting an 82. The Orange County native also experienced a dearth of birdies on her scorecard, suffering a plague of six bogeys and two doubles.

The SDSU lineup also included sophomore Fernanda Escauriza (Asunción, Paraguay), who saved her best for last, climbing nine places into a tie for 61st at 27-over 243 after posting a final-round 79, highlighted by a birdie on the par-5, 500-yard No. 11.

The Aztecs will have almost two weeks to prepare for the Mountain West Championships, scheduled for April 16-18, on the Dinah Shore Tournament Course at Mission Hills Country Club in Rancho Mirage, Calif.