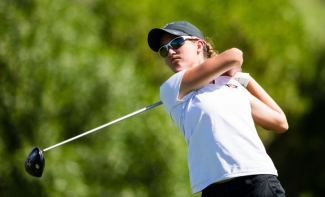 With their total, the two-time defending tournament champion Aztecs maintain a slim one-stroke advantage over second-place squads Michigan and Pepperdine, which both fired a 290, while host Denver (+4) and SMU (+5) round out the top five heading into Tuesday’s second round on the par-72, 6,216-yard Tom Fazio Course.

Individually, the Aztecs were led by Georgia Lacey (Del Mar, Calif.) and Haleigh Krause (Eugene, Ore.), who find themselves in five-way tie for second on a crowded leaderboard after each fired a 2-under 70. Lacey countered four bogeys with four birdies, including an impressive conversion on the par-4, 11th, which ranked as the third-toughest hole of the day. Not to be outdone, the SDSU senior also recorded an eagle at the par-5, 495-yard No. 2 to help match her lowest round of the year thus far.

Krause capped her day with an eagle of her own, sinking a 16-foot putt on the par-5, 505-yard 18th after recording a bogey-4 on the previous green. The Aztec senior also colleced five birdies, including back-to-back drains at No. 6 and 7, which helped ease the sting of a double-bogey at No. 11.

Perhaps the most intriguing round of the day was carded by Gioia Carpinelli (Bopplesen, Switzerland), who sits in logjam for 13th place with 10 other players after carding an even-par 72. The SDSU freshman sank a team-high eight birdies, including four on the back nine. However, a trio of double bogeys and two additional bogeys prevented a loftier perch.

In her first action of the season, Fernanda Escauriza (Asuncion, Paraguay) fired a 6-over 77 to finish the day in a tie for 50th. The Aztec sophomore was even at the turn after notching the last of her three birdies on the par-3, 135-yard No. 9, but was unable to sustain the momentum on the back nine, where she experienced a rash of five bogeys.

The SDSU contingent also included freshman Sara Kjellker (Hollviken, Sweden), who landed in a tie for 88th after carding an 87.

The Golfweek Conference Challenge resumes on Tuesday when the Aztecs tee off alongside Michigan and Pepperdine for the second round, starting at 11:30 a.m. MT/10:30 a.m. PT.