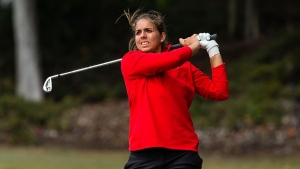 With her card, the Aztec senior catapulted 34 places on the individual leaderboard into a tie for 22nd with a combined 2-over 144 heading into Sunday’s final round on the par-71, 6,195-yard course layout.

Collectively, SDSU climbed five places into a tie for 11th place with California after shaving nine strokes of its first-round score with a 7-over 291. As a result, the Aztecs completed Saturday’s action with a 36-hole total of 23-over 591, remaining eight shots behind a pair of eighth-place squads in Washington State (+15) and San José State (+15), while Georgia occupies the 10th spot at 16-over.

Individually, SDSU’s Escauriza opened with a bogey at the par-5 No. 1, but played spot-free golf the rest of the way, sinking three birdies, including an impressive conversion on the par-4, 350-yard No. 9, which ranked as the fourth-most difficult hole of the day. As a result, the reigning South American women’s amateur champion completed her lowest round of the season and moved to within nine shots of Arizona State’s Linn Grant and Arizona’s Vivian Hou, who share the lead at 7-under 135.

Likewise, the Aztecs’ April Ranches (San Diego, Calif.) also made a significant gain on Saturday, jumping 23 spots into a tie for 33rd at 4-over 146 after logging a career-best 71. The SDSU sophomore offset four bogeys with a four birdies, including a successful make on the par-4, 380-yard No. 10, which ranked as the toughest hole of the second round and third-most difficult of the tournament.

On the flip side, Bernice Olivarez Ilas (Ayala Alabang, Philippines) tumbled 16 places into a tie for 61st at 8-over 150, thanks to a second-round 76. The Aztec freshman notched just one birdie at the par-5, 488-yard No. 7; however, four bogeys and a double bogey at No. 1 hastened her fall. Despite the difficulty, Olivarez Ilas still managed seven pars on the back nine, including four straight to finish her round.

Elsewhere, Gioia Carpinelli (Boppelsen, Switzerland) moved up three spots into a tie for 76th at 11-over 153 after shooting a 75 on Saturday. The SDSU junior found birdies elusive over the second 18 holes, but somewhat eased the sting of four bogeys with a team-high 14 pars, including five straight to end the day.

The Aztec starting five also featured Ella Adams (Adelaide, Australia), who slipped 18 places into a tie for 83rd at 16-over 158 on the heels of an 82. The junior transfer was even through five holes after starting par-birdie, followed by three straight pars. However, she suffered the first of her four double bogeys on the par-4 No. 6 and was never able to recover.

San Diego State wraps up play at the Stanford Intercollegiate on Sunday when it tees off for the final round with Georgia and California in a shotgun start beginning at 8:30 a.m.