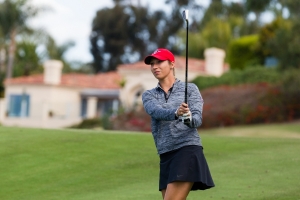 September 25, 2018 (Wolcott, Colo.) - The San Diego State women’s golf team climbed four places into the ninth position at the Golfweek Conference Challenge on Tuesday after shooting a collective 7-over-par-295 during the second round at Red Sky Golf Club.

The Aztecs, who shaved 11 strokes off their team score from the previous day, find themselves seven shots out of fifth place with a 36-hole of 25-over 601, heading into Wednesday’s final round on the par-72, 6,320-yard Tom Fazio Course.

All five SDSU starters displayed upward mobility on the individual leaderboard, including Gioia Carpinelli (Boppelsen, Switzerland), who fired a 70 to vault 12 places into a tie for eighth at 1-under 143. Starting on the 10th tee, the Aztec sophomore recorded one of the team’s three eagles on the day at the par-5, 510-yard 18th to go with birdies on the No. 3 and No. 11 greens.

With her performance, Carpinelli remain just five shots behind UCLA’s front-runners Patty Tavatanakit and Mariel Galdiano, who own a share of the lead at 6-under 138, while fellow Bruin Clare Legaspi, Pepperdine’s Hira Naveed and East Tennessee State’s Tereza Melecka are all tied for third at 3-under 141.

In addition, Sara Kjellker (Hollviken, Sweden) made eagle on the par-4, 380-yard No. 13, but was saddled with her second straight 74. The SDSU sophomore countered two bogeys and a double with three birdies over a four-hole stretch at No. 18, No. 1 and No. 3 to get to 1-under for the day. However, three untimely bogeys on her final four greens short-circuited the momentum. Despite the late difficulty, Kjellker still managed a modest gain of two places into a tie for 25th at 4-over 148.

Kitty Tam (Hong Kong, China) also made up ground in the standings, jumping eight places into a tie for 46th at 9-over 153 after logging a second-round 76. The Aztec senior led the team with four birdies, including back-to-back drains on her first two holes of the day at par-3 No. 10 and the par-4 11th, the latter of which ranks as the second-toughest hole of the tournament thus far. Tam made two additional conversions at No. 2 and No. 3, but three double-bogeys and one bogey on the back nine prevented a steeper ascent.

The biggest leap of the day belonged to Cameron Lee (Tustin, Calif.), who moved up 15 places into a tie for 65th at 13-over 157 after shooting a 75. The SDSU sophomore experienced a dearth of birdies on Tuesday, but eased the sting of three bogeys with a team-high 15 pars, including eight straight to close out the round.

The Aztec delegation also included Fernanda Escauriza (Asunción, Paraguay), who carded a 77 to finish the day in a tie for 74th with a 15-over 159. The SDSU junior trimmed five shots off her score from round one, aided by an eagle at No. 18.

With three aforementioned golfers among the individual top five, UCLA (-15) maintained its stranglehold on first place, while Pepperdine remains a distant second (-2), followed by Campbell (+3) and host Denver (+12).

The Golfweek Conference Challenge concludes on Wednesday when San Diego State hits the fairways with SMU and TCU for the final round, beginning with a shotgun start at 9 a.m. MT/8 a.m. PT.