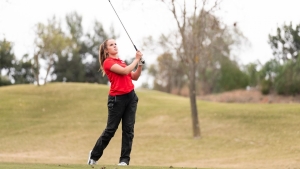 August 24, 2021 (San Diego) - First year head coach Lauren Dobashi has announced the San Diego State women’s golf 2021-22 schedule. The Aztecs will play in nine tournaments across six states as they attempt to make their 12th postseason in the last 13 years.

For the sixth time consecutive season, the Aztecs will open its fall slate in Albuquerque, N.M. when it participates in the Branch Law Firm/Dick McGuire Invitational Sept. 13-14 on UNM’s Championship Golf Course. Behind three top-25 individual performances, SDSU finished fifth when they last played this tournament in 2019.

Two weeks later, the Aztecs will play at the scenic Red Sky Golf Club in Wolcott, Colo. for the Golfweek Conference Challenge (Sept. 27-29). SDSU tied for fifth here in 2019 and will be looking to win its third title here in the last six tries.

Next up for the Aztecs is the Illini Invitational at the famed Medinah Country Club outside of Chicago October 11-12, which will conclude the fall portion of its schedule.

SDSU begins the spring campaign by hosting the Lamkin Invitational at The Farms Golf Club (Feb. 14-15) in nearby Rancho Santa Fe, Calif. Launched in 2013, SDSU tied for fourth at this event last season and won it in 2020.

The Aztecs will be competing in the annual Juli Inkster at Meadow Club Invitational March 7-8, where they placed third a season ago.

After a quick turnaround, SDSU will head across the country to participate in the Valspar Augusta Invitational at the Forest Hills Golf Club (Augusta, Ga.).

The Aztecs will compete in the three-day PING ASU Invitational March 25-27 in Phoenix, Ariz.

For the fourth year in a row, the Aztecs will head to wine country for their final tune-up before the conference tournament when they partake in the Silverado Showdown April 4-6 in Napa, Calif. SDSU placed 13th at this tournament last year.

The Aztecs will be seeking their 12th postseason berth as a team in the last 13 years when the NCAA conducts its regional championships, May 9-11, across four sites hosted by New Mexico, Michigan, Oklahoma State and Florida State.

If SDSU qualifies for the NCAA finals, it will compete in the national championship series for the first time in program history, May 20-25, at Grayhawk Golf Club in Scottsdale, Ariz.